For centuries, scholars have suggested the Star of Bethlehem may have actually been a "great conjunction" of bright planets. 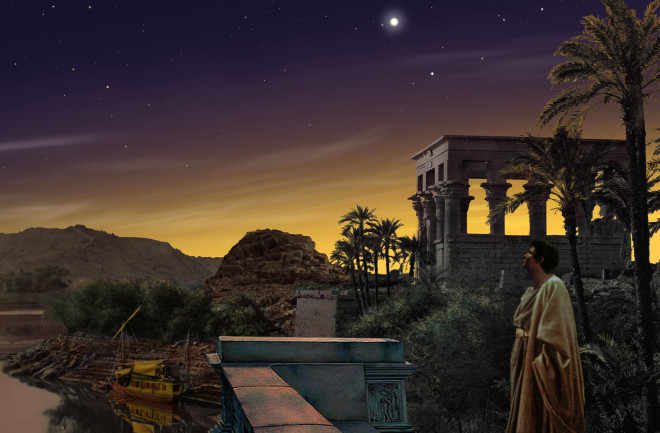 Could the Star of Bethlehem have been caused by a "great conjunction" of the bright planets Venus and Jupiter? On June 17, 2 B.C., the planets had come so close they would have almost appeared as one object, similar to the conjunction of Jupiter and Saturn in 2020. (Credit: Ron Miller/Astronomy magazine)

On December 21, Jupiter and Saturn will come together in a “Great Conjunction” unlike any seen in nearly 800 years. The two planets will appear so close together in Earth’s night sky on winter solstice that they’ll almost look like a single object.

That’s prompted some to dub the sight a "Christmas Star," and others to wonder about a similar sounding celestial event that coincided with the biblical first Christmas: the Star of Bethlehem. But did such a cosmic sight ever really exist? And if so, what does astronomical science tell us about what could have caused it?

Interestingly, there’s some evidence that a pair of planetary conjunctions — not unlike the coming Great Conjunction — happened around the historically accepted time frame for the birth of Christ. That could potentially explain the Star of Bethlehem. But, of course, not everyone agrees with the idea.

The three wise men, or Magi, arrived after Jesus' birth carrying gold, frankincense and myrrh, as captured in this Byzantine mosaic created in 565 A.D. (Wikimedia Commons)

The Star of Bethlehem

The story of the Star of Bethlehem appears only in the Book of Matthew. The gospel tells us that a bright star appeared in the eastern sky when Jesus was born, famously seen by a group of wise men. These biblical "Magi," sometimes called kings, now adorn nativity scenes around the world.

The Bible describes how these three wise men saw the new star as a sign of the birth of the King of the Jews, so they set out for Jerusalem to worship him. Once they arrive, they inquire about baby Jesus with Herod, the region’s ruler appointed by Rome. "Where is the child who has been born king of the Jews? For we observed his star at its rising, and have come to pay him homage," Matthew tells us.

But Herod is worried by the idea. He and his own wise men supposedly seek to discover Jesus’ birthplace. Eventually, they call on the three wise men to ask when the star appeared. And thanks to Micah's prophesy that the messiah would be born in Bethlehem, Herod sends the trio to Bethlehem to search for Jesus. (Supposedly, Herod also ultimately kills the infants of Bethlehem in an attempt to snuff out Jesus.)

According to Matthew, “When they had heard the king, they departed; and, lo, the star, which they saw in the east, went before them, till it came and stood over where the young child was. When they saw the star, they rejoiced with exceeding great joy.”

Evidence for the Star of Bethlehem

For centuries, astronomers have looked to the historical record in search of evidence for what could explain this Star of Bethlehem. Scholars have been discussing potential causes since at least the 13th century. Perhaps it was a supernova, a comet, a solar flare or an alignment of planets. Or, alternatively, maybe it never happened at all. The truth is, science will likely never know the truth.

But let’s entertain the idea that it was a real celestial event. What are some science-backed explanations that could explain the Star of Bethlehem?

Well, the story is relatively vague, but it does give us some clues.

Some things are easily ruled out. For example, the Star of Bethlehem couldn’t have been a meteor — a chunk of space rock that brightly burns up in Earth's atmosphere — which would’ve appeared and faded in an instant. There's no way three wise men could have tracked a meteor for weeks.

It’s also unlikely that a supernova — the explosive death of a star, which drastically increases its brightness for days, weeks or months — could explain the Star of Bethlehem. Supernovae, or “guest stars” have been consistently witnessed and recorded going back thousands of years. So if one had happened, other cultures likely would have taken note.

And even if it somehow escaped the written historical record, astronomers have observed remnants of many other ancient supernovae. And by estimating their peak brightness, researchers have even tied some remnants to events seen on Earth in the past. Yet telescopes haven’t found any evidence for a supernova remnant that sync up with the timing of the Star of Bethlehem. In fact, the only supernova that was visible from Earth around the time of Christ's birth actually happened in the year 185 A.D. and was recorded by Chinese astronomers.

Italian painter Giotto di Bondone witnessed Halley's Comet when it appeared in 1301 A.D. Then, he painted the Star of Bethlehem as a comet burning bright above Jesus in the manger. (Credit: Wikimedia Commons)

In the past, some interested astronomers have also suggested the Star of Bethlehem was a comet passing near Earth. These icy bodies from the distant solar system often shine quite brightly when they venture into the inner solar system and are heated by the sun. They're also known for sometimes visibly lingering in the sky for weeks or months at a time. And like supernovae, we also have historical records from other cultures regarding comets.

Sure enough, in the year 5 B.C., Chinese astronomers noted the appearance of a “Broom Star” that many researchers have interpreted as a comet. Like supernovae, Chinese scholars noted many historic comets, and even recorded a number of times that meteor impacts killed people.

In the 1970s, researchers caught onto the timing coincidence of this Chinese "Broom Star," and a string of papers started popping up in scientific journals debating the idea, among other inspirations. All the back and forth culminated in a 1977 story in The New York Times written by legendary science journalist Walter Sullivan that suggested it could have been a comet, conjunction, nova or simply myth. Clearly, no consensus opinion has emerged in the decades since, either.

So, could a comet have been the Star of Bethlehem? There’s no way to rule it out, but there is one obvious reason to doubt it.

Keep in mind that people in the ancient world typically saw comets as symbols of pending doom — an evil omen of bad things about to happen. So, if a comet suddenly started shining brightly in the night sky, it’s hard to imagine three wise men would interpret it as a sign that their savior had finally been born.

What about a mash-up of planets like the upcoming Great Conjunction of 2020? Could that explain the Star of Bethlehem?

When you rewind the motion of the planets — something that’s easy to do with observing software these days — you can see that several interesting conjunctions played out in the years around the life of Jesus. (A planetary conjunction happens when two planets make a close approach to each other in Earth’s night sky. The two objects aren’t actually near each other, though, they just look that way from our vantage point.)

In the year 7 B.C., Jupiter and Saturn had three conjunctions in the same constellation, Pisces. Because the planets move in their orbits at different speeds, and are located at different distances, sometimes they appear to pass one another in the night sky. They can also appear to hold still or move backward in the sky, which astronomers call retrograde motion. This trick is like passing a slower car on the highway. As you get close to the other vehicle, it seems to hold still beside you. Then, as you pull away, it drops backward. The same thing happens as Earth zips around the sun much faster than the outer planets.

However, Jupiter is closer to the sun than Saturn, so it also appears to move faster in our night sky.

So, if Jupiter and Saturn had three close conjunctions in a relatively brief period of time, it’s easy to imagine that ancient astronomers — really, astrologers — would have taken note. And they also likely would have ascribed some meaning to the event.

These same astrologers wouldn’t have had to wait long for an even more striking planetary encounter. Four years later, in the summer of 3 B.C., Jupiter and Venus met in an event that would have looked much like the upcoming "Christmas Star," also referred to as the Great Conjunction of December 2020.

On the morning of August 12 in 3 B.C., Jupiter and Venus would’ve sat just 1/10th a degree apart in the dawn sky. That’s one-fifth the diameter of the Full Moon. (The December 2020 conjunction between Jupiter and Saturn will have an identical separation, albeit in the evening sky.) That wasn’t the end of the show, either. Venus and Jupiter continued their dance over most of the next year before finally appearing to merge into a single star in June.

The idea that a conjunction between bright planets could explain the Star of Bethlehem isn't new. A note in the Annals of the Abbey of Worcester from 1285 A.D. points out an alignment of Jupiter and Saturn that happened at the time of Jesus’ birth. And Johannes Kepler himself touched on the idea in the 17th century.

Since then, many enthusiastic astronomers — and eager amateurs — have also pointed to other celestial positions playing out around the same time as further evidence that ancient astrologers would’ve found meaning in these events. Bright stars and planets were moving through important constellations. Still others have suggested that the Star of Bethlehem might not have been one celestial event at all. Instead, taken together, the combined effect of years of these astronomical events may have led the Magi to see signs a new king had been born.

But could any of these things have really caused the Star of Bethlehem?

The truth is, none of these events match up perfectly with the description of how things played out in the Book of Matthew. The context is also off. Ancient people knew their planets well, so it would be weird to call a conjunction of multiple planets a “star.”

Furthermore, it’s hard to imagine how Herod could be surprised by three wise men telling him about a new star; he surely would’ve seen any such bright or obvious object himself. According to the Bible, astrology is also heretical, which makes the idea of reading into the meaning of the stars a bit suspect in the first place.

In the end, we’ll likely never know what really inspired the biblical story of the Star of Bethlehem. Fortunately for us, we’ll get a chance to see our own “Christmas Star” of sorts on December 21. Then we can all decide for ourselves what it means to us. And, heresy aside, we all hope it brings good tidings for peace, joy, and love. Lord knows we need them right now.

Editor's Note: This story was adapted, in part, from reporting in the January 2010 Astronomy article, “What was the Star of Bethlehem?”