As researchers learn more about dark matter's complexities, it seems possible that our galaxy lives on top of a shadow galaxy without us even knowing it 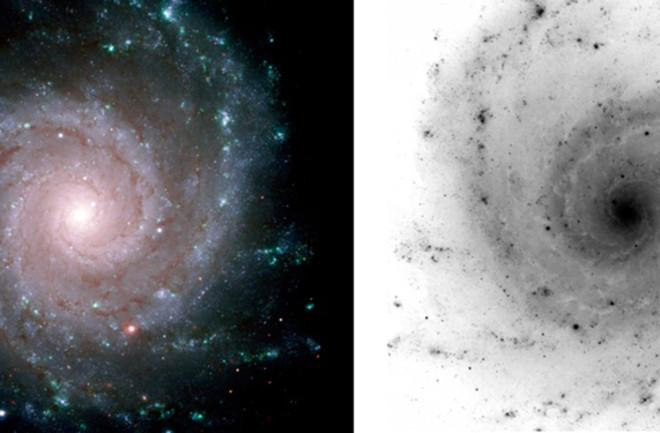 I am a light-matter chauvinist. Don’t snicker; you’re probably one, too. Almost all of us are.

We think of ourselves, and the world immediately around us, as something special. And by extension we regard our kind of matter — atoms, molecules, rocks, water, air, stars and all of the other things that interact with visible light — as the most important kind of matter in the universe. The only matter that matters, as it were.

Science tells a starkly different story. Last spring, the European Space Agency’s Planck spacecraft completed an ultraprecise 15-month census of the composition of the universe. The kind of matter that we can see makes up 4.9 percent of the total. Another fundamentally invisible type of matter vastly outweighs it, accounting for 26.8 percent. (The remaining 68.3 percent is an even more baffling component that consists of formless energy: That means more than two-thirds of the universe has no substance at all.)

Even the technical language used to describe the Planck result was humbling. Things made of visible atoms are known as baryonic matter, which sounds like something you’d take at the doctor’s office. The unseen 26.8 percent, in contrast, is “dark matter” — cool and mysterious.

But cosmologists have a hard time letting go of their prejudices. For years they convinced themselves that although the visible universe may be secondary in mass, it is where all the interesting things happen. Extrapolating from their very limited knowledge of how dark matter works, cosmologists assumed that dark matter consisted of just one kind of substance with a limited range of behavior, tending to gather in giant, diffuse clouds. They generally regarded dark matter as little more than the glue that holds together the visible universe and all its rich diversity.

Two recent advances hint at just how much we have been missing about the dark side. In January 2012, Christoph Weniger, a physicist at the University of Amsterdam in the Netherlands, started noticing hints of a strange type of radiation around the center of our galaxy. To his excitement, he realized that the glow could be a signal of dark-matter particles smashing into each other and, in the process, transforming from something invisible to something visible. If so, it might finally be possible to go beyond simply deducing where dark matter gathers, and start learning how it actually behaves.

The other shoe dropped earlier this year, when a group of Harvard University theorists, including Lisa Randall and JiJi Fan, formulated a new theory of dark matter. One of the oddest things about Weniger’s detection, Randall notes, is that it was possible at all. “The signal would be too small for you to see under most reasonable models of dark matter,” she says. But Randall and her collaborators realized they could tidily explain the observation if there were a second type of dark matter out there: one that is not as diffuse as the dominant component of dark matter, but can interact with itself, just like visible matter. Clumps of this interacting kind of dark matter could form a disk, collapsing into a plane that could produce a correspondingly concentrated signal like the one Weniger saw.

Acknowledging that dark matter might have some of the same kind of diversity as visible matter may seem a minor adjustment. But it’s one that has, as Randall narrates in an excited staccato, “super-dramatic consequences.” If one variety of dark matter can clump together, it could form a panoply of previously unimagined dark structures. It could ball up into dark stars surrounded by dark planets made of dark atoms. In the most extravagant leap of possibility, this new kind of dark matter might even allow the existence of dark life.

We could be sitting right on top of a whole shadow galaxy and not even know it.

The turnabout shouldn’t really come as much of a surprise. Galileo began chipping away at humans’ sense of self-importance a full five centuries ago, when he proved that Earth does not sit at the center of the universe, no matter how things look to us. Yet the tendency to judge the cosmos based on appearances (and assumptions of our primacy) has proved tenacious.

In the 1930s, the iconoclastic Swiss-American astronomer Fritz Zwicky collected the first evidence for dunkle Materie — dark matter. It took another 40 years before his colleagues grudgingly began embracing the idea, persuaded by new evidence that rotating galaxies would fly apart without the stabilizing gravitational attraction of dark matter. Not until the 1980s did nearly all astronomers accept that dark matter is real, and that it substantially outweighs the visible cosmos.

At that point, a small but growing number of researchers began attempting to understand, measure and map the shadow world. One approach, pioneered by astrophysicist Anthony Tyson at Bell Labs in the 1990s, crudely located dark matter by the way its gravity distorted the light of visible galaxies. The next decade, studies of the cosmic microwave background (the relic radiation from the Big Bang) by the Wilkinson Microwave Anisotropy Probe, or WMAP, provided a new way to measure the total amount of dark matter; this is the same technique that the Planck spacecraft built upon to come up with its more precise cosmic breakdown. Meanwhile, an underground Italian lab experiment called the DAMA (DArk MAtter) Project sought evidence of dark matter particles colliding headlong into atoms right here on Earth.

And still, none of those efforts did much to alter the basic assumption that dark matter was fundamentally simple and rather dull.

Weniger’s research, on the other hand, is seriously shaking things up. In January 2012, he and four collaborators were combing through 43 months of data from Fermi, a NASA space observatory that scans the sky for gamma rays — radiation similar to light, but far more energetic. One unusual signal starkly stood apart from the others. Again and again, Fermi recorded gamma rays of a very specific energy, 60 billion times as potent as ordinary yellow light.

Random cosmic violence tends to produce radiation of all different energies, equivalent to the roar of waves on the beach. This signal was totally different. It was more like the beep-beep-beep of a distress call. Weniger kept checking and rechecking his results. The gamma rays looked like the long-theorized flash of dark particles crashing into and destroying each other, which his team described as the “smoking gun signature” of dark matter. Mindful of the grand implications of this claim, Weniger continues to monitor the Fermi data. “It would be truly amazing if this turns out to be a real signal,” he says.

After Weniger announced what he and his team were seeing, more than 100 other papers followed as other scientists tried to confirm that the signal really exists and, if so, figure out what it means. Harvard’s Fan and Randall were inspired by that frenzy. Their key insight was discarding the old idea that dark matter is one thing and one thing only. That was when they recognized that some dark matter might not be so simple. A secondary component (as much as one-sixth of the total dark matter) might be able to interact, collapse and form a hidden, dark disk within the visible disk of our galaxy; the theorists therefore call it “double disk” dark matter.

Double-disk dark matter could do many of the same complex things that ordinary matter does. And there is so much dark matter overall that the secondary kind could weigh as much as all of the visible parts of the universe. “The fact that nobody had thought about this before is incredible,” Randall says. “What’s really fun about this idea is that it opens up a whole new world.”

Vision From the Other Side

Getting mainstream scientists to move past their light-matter chauvinism and take that shadow world seriously will require some highly convincing evidence. Weniger frets that the Fermi observations are too ambiguous to do the trick. “What one needs is more data with the same experiment to establish that the signal is there,” he says.

Harvard astronomer Douglas Finkbeiner is making an independent analysis of the Fermi data and likewise is finding that his results hang halfway between verification and falsification. “It’s the most frustrating possible outcome,” he sighs. “One option is that the signal is just not as bright as we thought it was.”

Randall is ready to forge ahead regardless of the fate of this particular observation. “The gamma ray line may not stay, but this just turns out to be independently such an interesting scenario, with so many interesting implications,” she says. And if our galaxy really does live right on top of a shadow galaxy, there are other ways to prove it.

Researchers are working on a new European space observatory called Gaia, scheduled to launch this autumn, which should perform a particularly telling test. Gaia will map the locations and velocities of about  1 billion stars within the Milky Way. Searching for anomalous motions could shade in the outlines of an invisible, dense disk of dark matter pulling on those stars.

Even then, we will have only scratched the surface of our galaxy’s dark side. The only sure thing is that we will never know unless we explore all the possibilities. In that spirit, Finkbeiner cites an old friend and fellow dark matter visionary, Neal Weiner at New York University. Weiner spins stories about Professor Dark Matter, a researcher from the other side who has formulated a far-out theory about a missing ingredient in the universe called “visible matter.” The professor accurately describes all the details of our world to her incredulous colleagues — with the end result that she fails to get tenure.

“Imagine a dark academic working in a dark lab trying to come up with a detector for visible matter,” Finkbeiner says. “It’d be a pretty difficult thing.” Then he pauses a beat, pondering the fate of the poor professor and still struggling to set aside his own light-matter prejudices.

[This article originally appeared in print as "Darklands of the Cosmos."]