Dragons may have entered the human imagination through the fossil record. 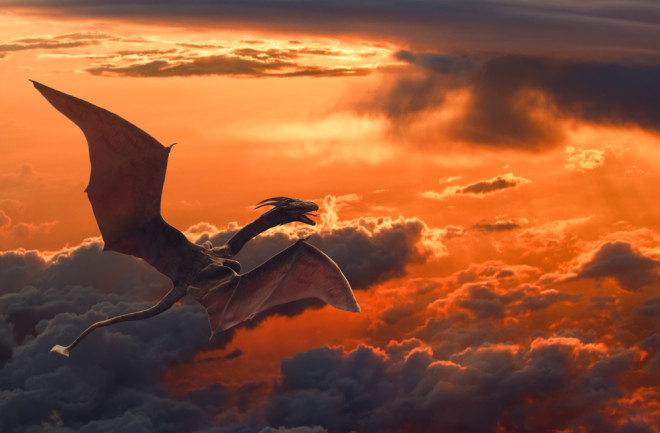 Fictional dragon flying in the sky as the sun sets. (Credit: Willyam Bradberry/Shutterstock)

Dragons hold a special place in the world of mythical beasts. They started out as snakes, then evolved into fire-breathing, flying monsters that both terrorize and charm us. But where did the idea for dragons come from in the first place? How did these magnificent creatures squirm and soar their way into our imaginations and mythology?

No one knows, of course, but the origin of dragons may have been more scientific than it seems. But let’s start with legend.

According to medieval legend, the town of Klagenfurt in Austria was founded on a marsh that was home to a lindwurm, or wingless dragon. Those wanting to settle in the area had to first deal with the dragon before founding Klagenfurt. As is traditional with dragons, this one gobbled up anyone who tried to cross the marsh. Fortunately, a local duke funded the building of a stone tower in the swamp. (Local legend is not specific on how the builders avoided becoming dragon chow.)

Once the building was complete, the locals fished for the dragon from the safety of the tower, using a chain for line, a bull for bait and presumably a hefty hook. Eventually, they captured the beast.

At this point in history, the dragon seems to have been little more than an enormous and fearsome water snake. But in the way of creatures both biological and mythical, it evolved. By 1287, the city’s coat of arms shows the monster as having the head of a wolf, the body of a bird and the tail of a snake. Within a few centuries, it had grown legs, evolving into something we would recognize today as a typical flying, fire-breathing dragon.

In the sixteenth century, some people found a fossilized skull they thought belonged to a dragon – proving the lindwurm legend. As it turned out, the skull belonged instead to a wooly mammoth. That sort of confusion may have been at the root of all dragon myths, as well as stories surrounding other mythical creatures.

As a scientific discipline, paleontology was born in the 18th and early 19th centuries because of the work from scientists such as Charles Lyell and Georges Cuvier. But people have been finding fossils as long as humans have walked the earth. The ancient Greek historian Herodotus wrote of fossils and concluded from them that Egypt had once been under water (and described some of the bones he examined as having belonged to winged serpents).

Adrienne Mayor, a classical folklorist and historian of ancient science at Stanford University, has argued that ancient people conceived dragons and other mythical creatures after finding fossils of even more ancient creatures. In her book The First Fossil Hunters, Mayor shows how fossils influenced Greek and Roman stories about bygone creatures — and not just dragons. She also says that the idea of human giants and larger-than-life heroes could have come from the discovery of the outsized bones of prehistoric mammals.

Read more: Turns Out, a Variety of Mammals Flourished Among Dinosaurs

If Mayor is right, dragons are not entirely fictional beings. The people who imagined them and told stories about them were imagining and telling stories about animals that once walked the Earth. They got the details wrong — just as we often do when studying ancient fossils. (Remember when we thought Stegosaurus had a second brain in its butt?)

But even when they were far from accurate, the stories our ancestors told about dragons and their mythical kin have enriched culture and no doubt inspired a lot of science as well.