The Science Behind Mythical Dragons 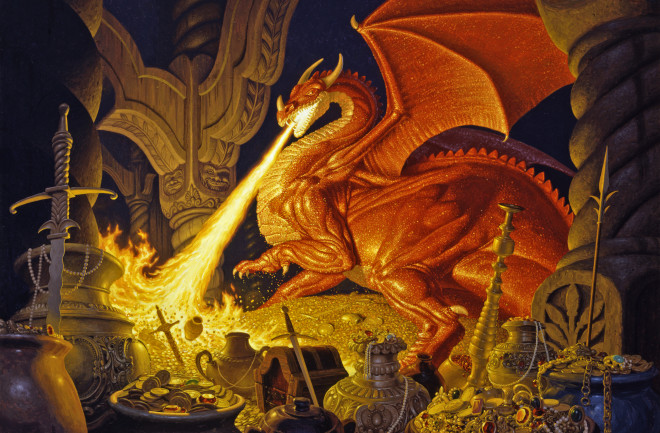 OK, let’s get something straight: We’re not saying dragons ever existed anywhere outside our imaginations. But the idea of dragons has captivated humans for centuries.

In theaters Dec. 13, J.R.R. Tolkien’s archetypal fire-breathing villain Smaug dominates in The Hobbit: The Desolation of Smaug, the second installment of Peter Jackson’s trilogy based on the novel.

That got us thinking: Could science explain any of Smaug’s fantastical features? We went to the man who’d know, paleontologist and Tolkien aficionado Henry Gee, who devoted an entire chapter to dragons in his book The Science of Middle-Earth.

The most dramatic aspect of dragons is arguably the most scientifically plausible. The bombardier beetle (Stenaptinus insignis), for example, produces the toxin benzoquinone and byproduct heat in a kind of internal combustion chamber, and then squirts it at any perceived threat. If the bombardier could evolve so complex a defense, it’s not much of a stretch to imagine a dragon with venom glands filled with a gas that could ignite when released with just a bit of friction.

“It’s really easy to make by ‘drying’ ethanol with sulfuric acid,” notes Gee, cautioning that making it is best left to dragons and scientists — don’t try this at home. “It’s so hard to handle without it catching fire spontaneously. A tiny spill and rivers of fire would stream across my lab bench at tremendous speed.”

Gee envisions how a dragon might biologically synthesize diethyl ether.

“Yeasts and other organisms produce ethanol as a waste product, and there are bacteria that excrete sulfuric acid (they’re responsible for corroding concrete). I could imagine a microbial community in which diethyl ether is made as a waste product and exploited by dragons to breathe fire.”

Because it produces copious amounts of vapor, a little diethyl ether yields an impressive amount of flame. As it does not mix with water, ether’s fires are not quick to extinguish and could easily cause the kind of destruction for which Smaug is legendary.

The least plausible aspect of Smaug is his capacity for flight. The dragon’s sheer size dwarfs the biggest pterosaurs, the largest flying animals ever known. And pterosaurs, which were gliders, had high aspect-ratio wings — long and narrow — which greatly reduced maneuverability.

“I’d say that Smaug would have had very large wings, both in span and depth, making a low aspect ratio, but one that generated a lot of lift,” suggests Gee. Smaug’s flight, he notes, is more like that of a raptor, with stoops, or dives, and great precision.

A model for Smaug might be a supersized version of the extinct Haast’s Eagle of New Zealand, which had short, broad wings in relation to its body size for better maneuverability in its forest environment, and a notably longer tail to compensate for lift lost with its shorter wings.

Smaug’s hall-filling size is comparable to that of a large dinosaur, and it’s likely the dragon would have evolved with similar mechanisms to lighten his mass, particularly given that he sometimes took to the skies. “Birds save weight by being basically hollow — they’re full of air spaces which connect to the lungs, some of which extend even into the bones,” notes Gee. “Dinosaurs were constructed in the same way, which could explain why Diplodocus could have grown so huge without overheating. Hot internal organs such as the liver were pressed against airspaces with a direct connection to the outside, so they were air-cooled.

“There is new research coming to light that this kind of construction — lungs connected to a system of air sacs that extend throughout the animal — is found very widely in reptiles, such as crocodiles,” Gee adds.

Air sacs also could, theoretically, function in flight similarly to the way swim bladders let fish control their buoyancy in water. The sacs might evolve to be separate from the lungs and filled with a gas less dense than air, such as methane — a byproduct of, ahem, flatulence, to which a dragon might be prone.

Vertebrate scales, like hair and nails, are made of lightweight keratin. Their shape could evolve to improve the dragon’s aerodynamics, much the way sharks’ dermal denticles — tiny V-shaped scales — reduce drag and allow the fish to swim faster.

Many mythical dragons speak as if human, but we couldn’t find a shred of scientific basis for why, in The Desolation of Smaug, the giant reptile has the silken, sexy baritone of actor Benedict Cumberbatch. That? That’s just magic.

[This article originally appeared in print as "How to Explain Your Dragon."]

Copyright (1999) by Thomas Eisner and the National Academy of Sciences, U.S.A.

Though dragons are the stuff of legend, the natural world actually offers plenty of precedent for flying, fire-breathing animals.

Check them out here. »