The housing bubble vs. the financial crisis

In the mid-2000s many regular folks knew that something was weird in housing. Of course everyone was aware that there was a short term windfall to be made if you could flip. But there were normal discussions about the bubble, and when it would burst, or if the weird arguments by some economists and the real estate industry that there wasn't a bubble were true. In contrast regular people weren't aware of the possibility of a financial crisis. I recall saying stupid things about the "Great Moderation," parroting what I'd heard smarter people who I assumed knew better say, in the summer of 2008. Or take a look at some of the comments when I mooted the possibility of a recession in mid-2007: "They’re practically glorified hiccups nowadays. I don’t get what the big deal is." With that in mind I looked at Google Trends for two queries, "housing bubble" and "financial crisis." The top panel is search query, and the bottom panel is news query. The financial crisis query is what you'd expect: 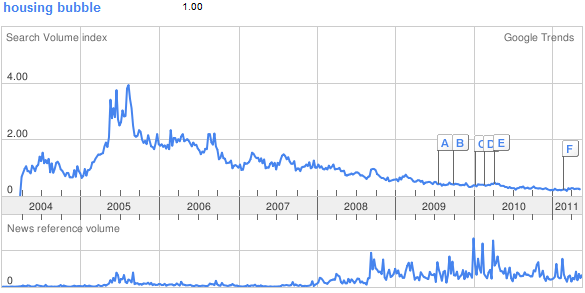 People were searching for the "housing bubble" query probably because it wasn't saturating the media. Once it was they had no reason to search, it was confirmed as a bubble. I vaguely recall similar issues in late 1999 and early 2000. Before the "internet bubble" burst we were all talking about it. Once it burst it was kind of depressing and we didn't want to talk about it, but the news wouldn't stop covering it.