The Global Race to Return to the Moon

And this time, to stay. 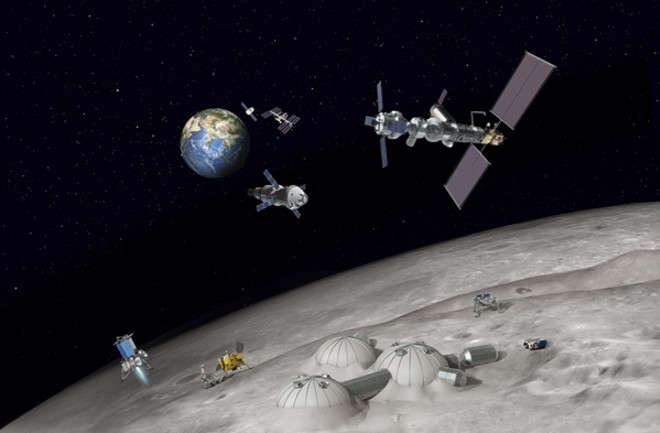 Invigorated by a renewed fascination with space exploration, as well as the emergence of billionaire-backed private spaceflight companies, humans are once again shooting for the moon.

Cutting-edge crew capsules, powerful rockets and the world’s first moon-orbiting space station could launch a new push to explore — and eventually inhabit — the lunar surface. So buckle up: The next decade is sure to be a wild ride.

Orion capsule: Astronauts need a reliable vehicle to commute from Earth to the upcoming lunar Gateway space station. That’s where the Orion crew capsule comes in. Developed by Lockheed Martin, NASA and the European Space Agency, the spacecraft could ferry up to six astronauts to lunar orbit by the early 2020s.

Chang’e: China’s Chang’e 4 mission made the first landing on the moon’s far side in January. Future missions will collect and return lunar samples, explore the poles for resources that could be mined and prep for a Chinese crew of “taikonauts” sometime in the 2030s.

Luna: The Soviets abandoned their moon dreams after the Luna 24 mission in 1976. But now, Russia has planned at least five uncrewed missions. The first, Luna 25, could land near the moon’s south pole in 2021 to prospect for minerals, water and other resources that cosmonauts would need for a moon base.

Crew Dragon: SpaceX’s Dragon cargo capsule already delivers supplies to the International Space Station. But starting this summer, a crewed version of the capsule will start carrying humans as well. SpaceX is also finalizing modifications to let Dragon carry up to seven astronauts (or tourists) even farther, into lunar orbit.

Deep Space Gateway: NASA says it will begin launching modules in 2022 for the Lunar Orbital Platform-Gateway, a space station that will orbit the moon. Once built, it will house up to four astronauts — and their experiments — during 30- to 90-day lunar missions.

Lunar XPRIZE: The decade-long Google Lunar XPRIZE, which offered $20 million to the first commercial company that lands a functioning robot on the moon, ended last year without a winner. But now, at least five teams have concrete plans to land on the lunar surface within a few years. And the XPRIZE Foundation is chasing new sponsors to revive the contest.

Lunar living: Humans have talked about returning permanently to the moon ever since Gene Cernan left Apollo’s final bootprints in 1972. While plans remain nebulous, the U.S., China, Russia and Europe have all discussed building moon bases in the coming decades. Europeans recently released their plans for a “Moon Village,” which robots could start building in as little as five years. Humans would follow once the base is habitable.

U.S.: Spurred on by the signing of President Donald Trump’s Space Policy Directive-1, the United States is committed to sending astronauts back to the moon by the late 2020s.

China: After a series of robotic missions, China aims to land a crew on the lunar surface in the early 2030s.

European Union: The European Space Agency plans to mine lunar regolith — moondust — for valuable resources like oxygen and water by 2025.

Japan: The country’s Smart Lander for Investigating Moon (SLIM) spacecraft will use facial recognition technology on craters to prep for extremely precise lunar landings in the early 2020s.

India: The country’s second lunar mission, Chandrayaan-2, was set to launch in April 2019. The craft’s planned landing site is near the south pole, where the rover mission will explore the lunar surface.

[This story originally appeared in print as "Back to the Moon."]