The genetic affinities of Ethiopians 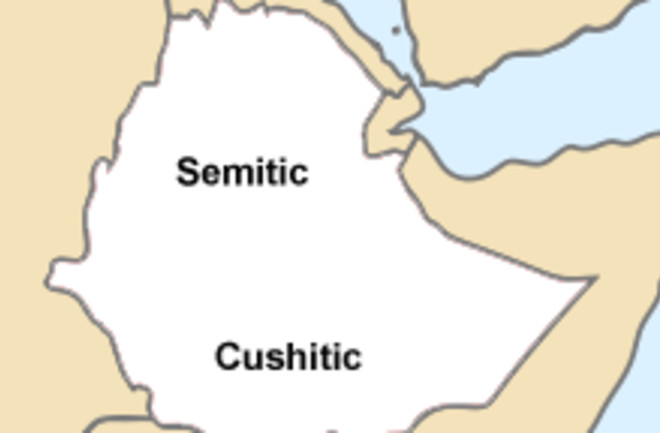 In the open thread someone asked: "Any recent stuff on the genetics of Ethiopians." That prompted me to look around, because I'm curious too. Poking around Wikipedia I couldn't find anything recent. A lot of the studies are older uniparental lineage based works (NRY and mtDNA). Ethiopia is interesting because unlike almost all other Sub-Saharan African nations it has a long written history. Culturally and linguistically it has both Sub-Saharan African, and non-Sub-Saharan African, affinities. The languages of highland Ethiopia are clearly Semitic. Those of lowland Ethiopia are Cushitic, a branch of the broader Afro-Asiatic language family concentrated around the Horn of Africa (Somali is a Cushitic language, though most Ethiopian nationals who speak a Cushitic dialect are of the Oromo group).

From a human evolutionary genetic perspective, Ethiopia also has specific interest. It is likely that the main recent pulse of humans Out of Africa traversed this region. Additionally, there is some evidence of deep time connections between the groups ancestral to Ethiopians and the Khoisan of southern Africa. It may be that Ethiopians and Khoisan are reservoirs of ancient genetic variation in Sub-Saharan Africa which as been overlain by Bantu in most other regions outside of West Africa. Finally, Ethiopians are known to have high altitude adaptations. This could be due to long term residence in the region, or, assimilation of favorable alleles from the long term residents by later populations.

Fortunately we can get a sense of the genetic affinities of Ethiopians thanks to a paper published last spring, The genome-wide structure of the Jewish people. The focus was clearly on Jews, but they surveyed Amhara &amp; Tigray (Semitic speaking highlanders), Ethiopian Jews (similar ethnically to the Amhara &amp; Tigray, but religiously non-Christian), and Oromo. In the PCA the Oromo and Semitic speaking populations are pretty obviously distinct clusters.

This just means that when you take worldwide genetic variation, and pull out the biggest independent dimensions, and then visualize individuals on the two largest dimensions in terms of how they explain variance, the Oromo and other Ethiopians don't really intersect. Interestingly the Amhara and Tigray are almost indistinguishable, but the Ethiopian Jews are in their own cluster. There are, for the record, 7 Oromo, 7 Amhara, 5 Tigray, and 13 Ethiopian Jews in the sample.

Now let's look at the genetic variation in ADMIXTURE. Remember this assigns the genomes of individuals in proportions to K ancestral units. As an example, if you had African Americans, Yoruba, and White Americans, in a total pool, and did K = 2, you might have a tendency where Yoruba and White Americans are in two totally different ancestral populations of K, while African Americans are 80% in one ancestry and 20% in another. The interpretation of this is straightforward, but when it comes to populations whose backgrounds we don't know as well, one should be careful. The selection of a particular value for K is going to be really important, and we shouldn't confuse the method from the reality which the method is trying to plumb.

First, K = 8 from Behar et al. I've reedited to highlight populations which might inform the variation of Ethiopians.

Now let's look at a series of K's. Note the changes.

Luckily for us, we don't need to stop here. Dienekes included Behar's Ethiopians (non-Jews) for Dodecad. Additionally, he included the Masai population from the HapMap. This turns out to be important because he found that Ethiopian Sub-Saharan ancestry is similar to that of the Masai, not the other African groups.

Dienekes also provided individual outputs. I've stitched together Ethiopians with Egyptians and Saudis. The color coding is the same as above.

You should be able to tell where the three groups start and stop pretty easily. I'm 99% sure that the six individuals with more East African and less Southwest Asian ancestry are all Oromo. Ethiopians, in particular highland Ethiopians, seem to me likely an ancient stabilized hybrid population between a population from Arabia, and a local Sub-Saharan population. This population seems unlikely to have been related to the peoples of West-Central Africa, who are associated with the Bantus across eastern and southern Africa. The Bantu agricultural toolkit runs into ecological constraints in various regions, and it is in those regions that non-Bantu populations have persisted. Ethiopia, with its unique climate and topography, naturally remains non-Bantu (as well as the Horn of Africa as a whole). The possible connections between Khoisan and Ethiopia may be a function of the fact that these areas harbor genetic variants which have disappeared in the intervening regions because of the Bantu expansion. I have a hard time accepting that the Bantu expansion was particular eliminationist, but I am starting to suspect that outside of Ethiopia population densities were very, very, low.

The antiquity of this ancient hybridization event to me is attested by the fact that Ethiopians lack any of the other Middle Eastern components besides the one modal in Saudi Arabia. There is a great deal of intra-population variance in the Saudi data set. Why? Part of this must be the slave trade, as well as pilgrims who remained in places like Mecca. But, I think part of the untold story here is that there may have been a larger genetic impact on Arabia after the rise of Islam from the Levant than vice versa! Probably the gene flow precedes Islam, as Arabia was hooked into worldwide trade and population movements, which Ethiopia was relatively insulated from. The Saudi data set has several people who are "pure" Southwest Asian, but also several who have a great deal of West Asian + South European. These seem likely to be people who have some background in the Fertile Crescent.