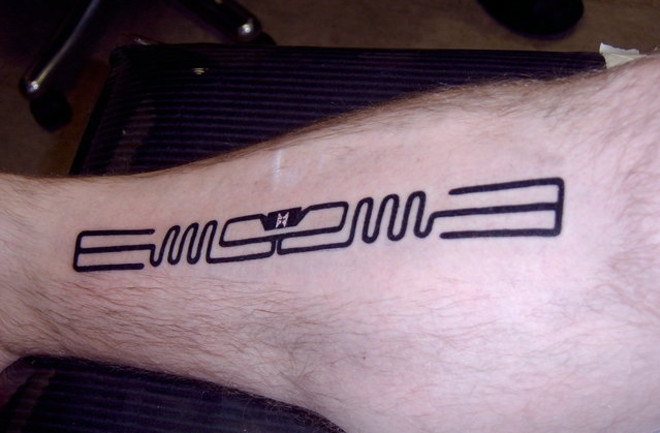 "I have a degree in Computer Science, and I work with RFID (or at least I did till recently)." On his Livejournal blog, he adds, "For the curious, this is an Alien Technology's European model Gen 1 Squiggle RFID tag. It's actually copper in color and about six centimetres long. I scanned it and blew it up to a bit over twice it's original size, and changed its color to black."

Carl: RFID stands for radio frequency identification. RFID tags, which are embedded in many of the products sold today in stores, are programmed to store information about them. To get the information, you point an RFID reader at the tag and release a burst of radio waves. The energy from the waves powers up the tag, which then sends back a signal of its own. Paul's RFID tattoo says a lot about him now, but, if he wanted, it could say a lot more. Maybe too much. Click here to go to the full Science Tattoo Emporium.