Spotting Satellites in the Night Sky

When and where to look for synthetic shooting stars. 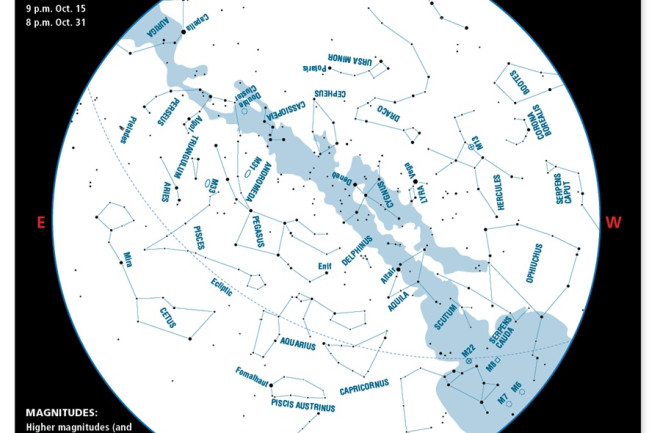 Traditionally, looking up at night was an act of escape, ascending from the human world into the cosmic one. But the growing number of artificial objects zipping around Earth has inspired a more synthetic form of skygazing: the new sport of satellite watching. You could think of it as the nighttime version of train spotting. (It even has its own insiders’ checklist for earning an award pin.)

Satellite watching is easy to do even under severely light-polluted city skies. The most prominent satellite — the 358-foot-wide International Space Station — routinely outshines the brightest stars.

The far less famous Iridium satellites, a fleet of 66 telecommunication relays in low-Earth orbit, can shine brighter still. Because of their unusual six-sided shape, these satellites create brief flashes of reflected sunlight, called Iridium flares, that can reach a brightness of magnitude -8, about 30 times brighter than Venus at its peak. Satellite watching is also ideal for the impatient, since good appearances happen all the time.

Technology makes it easy; sources like Heavens Above will tell you when and where to look. The true challenges are vantage and timing. Many satellite passages happen at low angles, so nearby buildings and trees may block your view. And unlike deep-space observing, time is of the essence. Passages of the International Space Station typically last just five minutes. Iridium flares vanish in 20 seconds or less.

It’s one more reminder that, from a cosmic perspective, all things human are fleeting.

[This article originally appeared in print as "Satellite Spotting."]