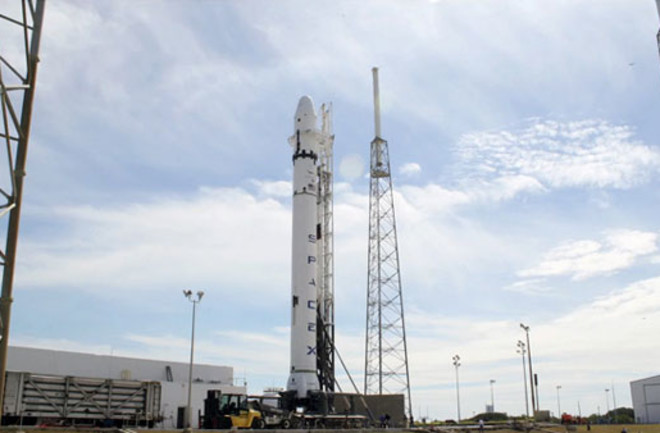 The Falcon 9 rocket blasted away from its Florida launch pad this afternoon, marking a major victory for the private space company SpaceX. The company, founded by the daring entrepreneur Elon Musk, hopes to build space taxis for NASA that can ferry cargo and crew to the International Space Station. As we reported earlier today, Musk downplayed expectations for the test launch. But judging from the company's live webcast, the procedure appeared to go remarkably well. Three minutes after liftoff the two stages of the rocket separated and the second stage's engines ignited; nine minutes after liftoff the rocket achieved Earth orbit. SpaceX verified that the rocket reached orbit, but hasn't released any further information yet (stay tuned for details). If all continued to go as planned, SpaceX engineers are now studying the dummy version of the crew module, called the Dragon Spacecraft, that went up with the rocket and is now orbiting the planet. The plan called for Dragon to make several orbits and then reenter the Earth's atmosphere and splash down in the Pacific Ocean, where SpaceX could retrieve it for study. Today's successful launch also gives a boost to President Obama's proposal to let private space companies take over the routine tasks of space flight, allowing NASA to set its sights higher--a plan that has been met with considerable opposition. Following the Falcon 9's launch, NASA administrator Charles Bolden praised the company in a statement:

"Congratulations to Space X on today's launch of its Falcon 9 launch vehicle. Space X's accomplishment is an important milestone in the commercial transportation effort and puts the company a step closer to providing cargo services to the International Space Station." [NASA]