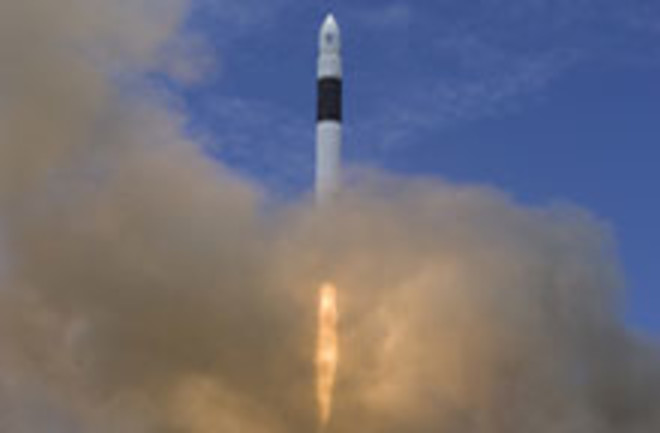 In a major disappointment for the young industry of commercial space flight, one of the leading companies, SpaceX, failed to send its rocket into orbit in a test flight on Saturday. The company said the spacecraft, the Falcon 1, had a successful liftoff, but went astray about two minutes into its flight when the main cargo-carrying component failed to separate from the booster rocket. It was the third successive launch failure for the company:

The first Falcon 1 launch, in March 2006, failed about a minute into its ascent because of a fuel line leak. A second rocket, launched in March 2007, made it to space but was lost about five minutes after launching [The New York Times].

The malfunction casts doubts on the ability of private space companies to provide transport services for NASA during the five years between the retirement of the space shuttle fleet and the completion of NASA's next generation rocket system, which is not expected to be ready until 2015.

NASA has invested hundreds of millions of taxpayer dollars as part of a partnership with SpaceX to develop the first commercially-operated rocket designed to take cargo to the space station. If SpaceX can't execute a successful launch soon, those plans could start to fall apart, prompting Congress and the government to re-evaluate SpaceX's ability to play a major role in space [Orlando Sentinel].

The company's founder, the internet entrepreneur and millionaire Elon Musk, vowed to press on with more test flights, and

said the fourth launch of the 90-foot rocket "is almost ready for flight." In a prepared statement, Mr. Musk also said that the company "will not skip a beat in execution going forward" [The Wall Street Journal].

The Department of Defense and NASA have hoped to rely on the Falcon rockets for low-cost launches of satellites, and the lost rocket on Saturday contained several, including the NanoSail-D, a test craft designed to use the solar wind for propulsion.

[T]he ashes of over 200 people were also on board, including a pair of rather well known astronauts, one actual, one fictional. They were Gordon Cooper, one of the original Mercury 7, and "Scotty" himself, James Doohan [Ars Technica].