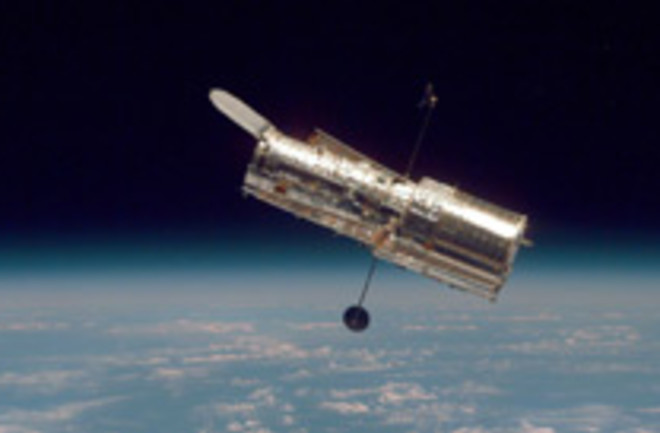 At 2:01 this afternoon in Florida, the space shuttle Atlantis is expected to roar off its launch pad and set off toward the orbiting Hubble Space Telescope, for the fifth and final repair mission in the telescope's history.

The countdown timeline is on target, and "Atlantis is ready to fly," said Charlie Blackwell-Thompson, NASA's test director.... The 11-day mission will include five spacewalks to refurbish Hubble with state-of-the-art science instruments. After the upgrades, the telescope's capabilities will be expanded, and its lifetime extended through at least 2014 [CNN]

. The current mission carries a higher degree of danger than the space shuttle's habitual jaunts to the International Space Station.

Hubble orbits about 350 miles above Earth, in an area with a higher density of debris. Earlier this year two satellites collided over Siberia, which has increased the risk even more, as junk from that collision drifts lower [ABC News].

While NASA will track orbiting space junk as it always does, the agency has also taken the precaution of getting the space shuttle Endeavor ready for launch on another pad in case a rescue operation is necessary. NASA will cover the launch live on NASA TV, and DISCOVER's own Bad Astronomy blogger, Phil Plait, will be posting updates on his breaking news Twitter account. While the Hubble has thrilled the world with its cosmic vistas, revealing the birth of stars in gaseous nebulas and stellar death in the form of violent supernovas, it has also had its difficulties. After its 1990 launch, astronomers were embarrassed to discover that one of its main cameras had a flawed mirror that resulted in fuzzy images. But in a 1993 repair mission, spacewalking astronauts corrected the problem by installing what was essentially a huge corrective lens. More recently, last September, a computer malfunction derailed the telescope and required a remote-controlled reboot. That glitch also delayed the final Hubble servicing mission, which was originally scheduled for October; NASA decided to push it back so spare parts could be sent up on the shuttle. Once the astronauts reach the Hubble, one of their targets will be the the Wide Field and Planetary Camera 2.

The WFPC2 -- "Wiff-pick 2," in NASA vernacular -- captured many of the images that made the Hubble famous. It is now going to be swapped out (replaced by Wiff-pick 3) and lugged back to Earth aboard the shuttle. It will then have a valedictory scientific moment, as NASA plans to study the abundance of micrometeorite impacts on a surface of the instrument that has been exposed to space for 15 years.... "It's time to retire it. It's time for it to come home," said John Trauger, the principle investigator for the camera [Washington Post].

Among other operations, the astronauts will also install the Cosmic Origins Spectrograph, which will study the dark matter tendrils that are thought to bind together galaxies. Says astronaut John Grunsfeld, who is making his third trip to the Hubble:

"Each time we go back to Hubble we re-invent the telescope, we bring up new instruments allowing Hubble to see new areas we have never seen before," he said. "And so what I always think about is, when we put the new wide-field camera in or the cosmic origins spectrograph in -- two of the new instruments -- what will be that next great discovery that no one has thought of before?" [ABC News]