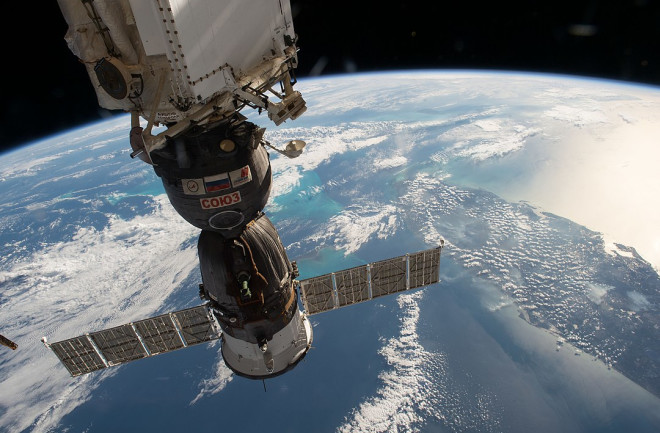 The International Space Station had a close shave this afternoon when a diminutive piece of space debris whizzed past the station at dangerously close range, forcing the first ever evacuation of the station. The three crew members took shelter in the

attached Russian spacecraft that serves as an emergency lifeboat. The debris missed, and the astronauts quickly returned to the station after just 11 minutes aboard the Soyuz spacecraft. But the unusual event offered a reminder that astronauts and spacecraft are increasingly playing a deadly game of space-debris dodge ball in orbit [Washington Post].

The object that prompted the evacuation was a fragment of a motor used to launch a satellite. Although the piece of debris was only about one-third of an inch long, experts say that even tiny pieces of space junk can cause great damage, as objects in orbit travel at great speeds.

Mission controllers detected the orbiting debris Wednesday night, too late for the crew to take evasive action, Humphries said. In previous instances, controllers have been able to maneuver the station out of the way of a threatening piece of space junk, "but because of the late notice, we didn't have time to coordinate that," he said [CNN].

NASA officials say the evacuation was a precaution triggered by realization that the piece of debris was going to pass within 2.8 miles of the station.

If the debris had struck the station and caused serious damage, the crew might have had to fly the Soyuz back down to Earth and leave the multibillion-dollar orbiting outpost under remote control [MSNBC].

Space agencies say that space debris is a growing problem as old satellites and discarded rocket boosters are piling up in orbit. Last month two satellites collided in orbit for the first time, providing a vivid demonstration of what can go wrong when two objects traveling at about 17,500 miles per hour ram into each other. And that incident only made matters worse: NASA officials say that at least 600 pieces of debris spun off from the collision. U.S. Strategic Command routinely tracks over 18,000 pieces of debris as they hurtle through space. Related Content: Bad Astronomy: BREAKING: Small but finite chance ISS to be hit by debis 80beats: Experts Declare War on Space Junk… So What Do We Do Now? 80beats: Satellites Collide Over Siberia, Creating Showers of Space Debris 80beats: Oopsy: Astronauts “Drop” Tool Kit During Spacewalk 80beats: Repair Mission to the Hubble May Encounter Perilous Space Debris DISCOVER: Watch the Skies–For Junk, an interview with the head of NASA’s orbital debris office Image: NASA, showing a Soyuz spacecraft docked at the Space Station