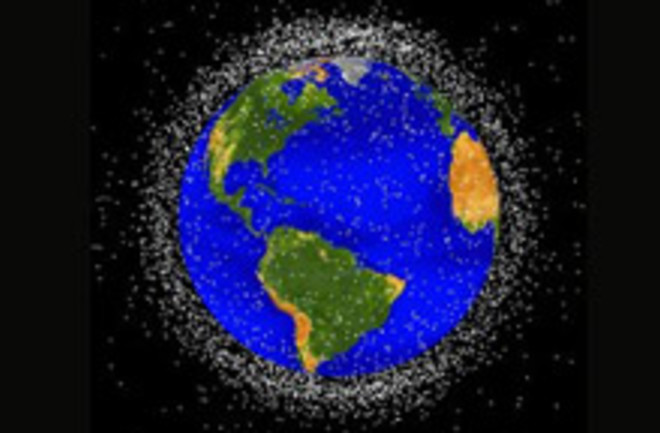 In an unprecedented space accident, two satellites collided in orbit yesterday, pulverizing each other and creating clouds of orbital debris that could pose a threat to other satellites and spacecraft. The accident occurred when a defunct Russian satellite and a U.S. communications satellite rammed into each other 491 miles above Siberia while each was traveling about 17,500 miles per hour. While NASA officials say this is the first such collision on record, they didn't express much surprise.

"We knew this was going to happen eventually and this is it -- this was the big one," said Nicholas Johnson [ABC News],

who tracks orbital debris with NASA. In their first estimate, NASA said at least 600 pieces of debris had spun off from the collision, and noted that even small chunks can pose a threat since they move at such high speeds. But the International Space Station is not thought to be imperiled because it's in a lower orbit, 220 miles above the earth. Some pieces will drift down towards the station over time, but the

risk to the station, Mr. Johnson added, “is going to be very, very small.” In the worst case, he said, “We’ll just dodge them if we have to. It’s the small things you can’t see that are the ones that can do you harm” [The New York Times].

The Space Station has maneuvered to avoid debris eight times in the past, NASA says. The Russian satellite was launched in 1993, and officials say it has been out of service for a decade. The second satellite, which was launched in 1998, belongs to the U.S. communications company Iridium. Each satellite weighed over 1,000 pounds.

Asked which satellite was at fault, Johnson said "they ran into each other. Nothing has the right of way up there. We don't have an air traffic controller in space. There is no universal way of knowing what's coming in your direction" [CNET].

U.S. Strategic Command routinely tracks over 18,000 objects in space, including operational and defunct satellites, discarded rocket boosters, and debris that can be as small as a baseball. NASA tracks objects that are smaller than that.

In the past abandoned or dysfunctional satellites have caused problems, with some pushed into extremely wide "graveyard" orbits that move them out of the way of other spacecraft. In several cases, rogue satellites have been shot out of the sky to prevent them crashing to Earth [The Guardian].