Experts Declare War on Space Junk... So What Do We Do Now? 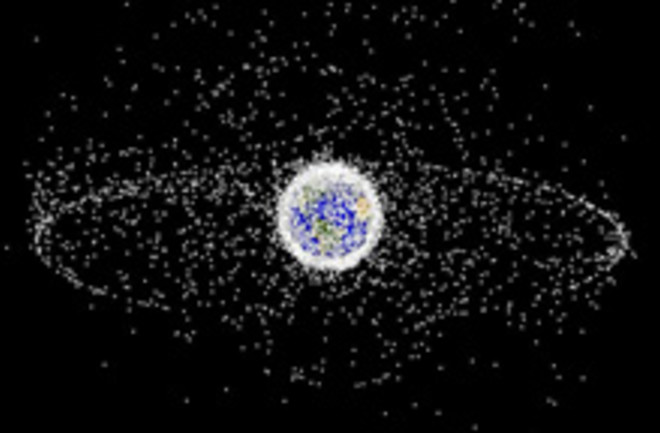 Following last week’s collision of two satellites in orbit, and then the fireball that mysteriously fell from the sky in Texas, has come a flurry of debate over what to do with all the potentially dangerous debris orbiting the Earth in space. Experts are in Vienna this week, as part of a meeting of the United Nations Committee on the Peaceful Uses of Outer Space, to discuss what to do with the vast amount of space debris, which includes millions of various-sized pieces of junk left during humanity's messy first half-century of space exploration. It's a growing problem that no one knows how to deal with. Some suggest a cosmic cleanup is the way to go. Others say time, energy and funds are better spent on minimizing the likelihood of future crashes by improving information sharing [AP]. Richard Crowther, the British representative to this week's U.N. meeting, says satellites should have a mechanism that automatically sends them back to Earth once their job is done, burning up safely in the earth's atmosphere [Sky News]. Another solution, developed by the International Academy of Astronautics, proposes attaching balloons to pieces of debris to increase their atmospheric drag and bring them back to Earth faster. Another ... foresees attaching a 10-mile (16-kilometer) electrodynamic tether to debris that would generate a current, which then could be controlled from the ground enabling technicians to bring it down [AP]. Among the oddities in orbit are a glove, which was lost by an American astronaut doing repairs on the International Space Station (which is itself orbiting 135 miles up) [Times Online]. Researchers estimates of which hover at around 18,000 objects larger than four inches (10 centimeters).

If you include debris that is less than 1cm in diameter, the total rises to tens of millions of items. These are added to by the shooting-down of satellites that have outlived their usefulness with ballistic missiles, which both China and the U.S. have done in recent years [

Times Online]. On a space walk the effects [of a collision with even small pieces of space debris] would be disastrous: an object the size of a speck of paint hitting a spacesuit at 17,000 mph would have the same effect as a bullet [Sky News]. Nicholas L. Johnson, NASA's chief scientist for orbital debris, predicts that if more junk accumulates, the likelihood of similar collisions — currently very rare — will increase by 2050. To Johnson, the "true solution" in the long run is to go get the junk — or push it away to a higher altitude before it has time to crash into anything [AP]. Related Content: 80beats: Satellites Collide Over Siberia, Creating Showers of Space Debris DISCOVER: Astronomers Discover the First Ring Around a Moon