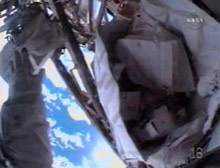 In an unusual moment of klutziness, spacewalking astronaut Heide Stefanyshyn-Piper let a tool kit slip from her grasp while she was working outside the International Space Station yesterday, and watched helplessly as it drifted away into deep space.

"Oh, great," said a dismayed Stefanyshyn-Piper, a veteran of two spacewalks in 2006, as she watched the bag float away [Florida Today].

The mishap occurred during the first of four spacewalks scheduled to be completed during the visit from the Endeavour space shuttle crew. The tool kit made its escape while Stefanyshyn-Piper and her colleague Steve Bowen were

greasing a rotary joint on the station's giant starboard solar array system. The joint has been unable to automatically point the solar wings toward the Sun for maximum energy production for over a year. Just as she was finishing up the job, the tool bag became untethered from a larger kit case and floated away along with a pair of grease guns, wipes and a putty knife. She reached out, but to no avail [BBC News].

The two spacewalkers were able to finish their task by sharing tools from Bowen's bag. Mission controllers say the three remaining spacewalks will have to be revamped slightly to adjust for the reduced number of tools now available, but said that the loss posed no major problems. It simply highlights the precision necessary in everything that's done in space, said one mission controller:

"What it boils down to is all it takes is one small mistake for a tether not to be hooked up quite correctly or to slip off, and that's what happened here," said lead spacewalk officer John Ray [AP].

Space debris is a growing concern among NASA officials, who track the 8,000 or so pieces of orbiting man-made junk that are larger than 10 centimeters in diameter. The briefcase-sized tool kit is one of the largest objects ever lost during a spacewalk, but officials

weren't worried the bag would hit the space station or the docked space shuttle because by late Tuesday it already was 2 1/2 miles in front of the orbiting complex, said flight director Ginger Kerrick. "It is definitely moving away with every orbit," Kerrick said [AP].