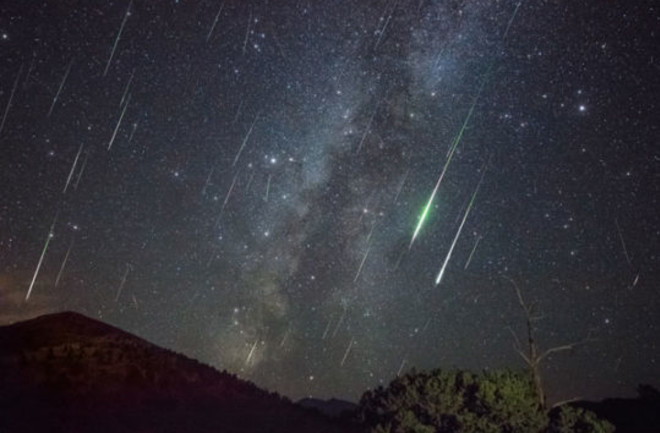 This composite image is made of several exposures shot in Arizona of the Perseids meteor shower. On Friday, a rocket launched from Japan carrying satellites that will put on the world's first artificial meteor shower. (Credit: Jeremy Perez)

A rocket blasted off from Japan on Friday, Jan. 18, carrying satellites that will deliver the first-ever artificial meteor shower. The Tokyo-based start-up ALE Co. Ltd has developed a new micro-satellite that will put on quite a show over Hiroshima early next year. Each satellite carries tiny balls with a secret chemical makeup. Once rocketed away from Earth, the satellite will release these balls, which will glow as they whiz through the atmosphere, simulating the appearance of a meteor shower. These balls are designed to glow bright enough to be seen even over light-polluted cities, according to reporting by science news site phys.org. Each glow-ball, or “star,” is expected to shine for a few seconds before they completely burn up. There is no risk of the balls falling low enough to cause any issues on Earth. ALE hopes that eventually, they will be able to provide the public with a "shooting stars on demand” service — the projected price of this service is not yet known. Seven of these tiny satellites took a ride on the small Epsilon-4 rocket, which launched from the Uchinoura space centre in Japan by the Japan Aerospace Exploration Agency (JAXA). "I was too moved for words," ALE CEO Lena Okajima, expressed to the Jiji Press agency, according to a statement. "I feel like now the hard work is ahead," she added. [embed]https://www.youtube.com/watch?v=jgkVzth9CDA&feature=youtu.be[/embed]

The rocket released the satellite 310 miles (500 km) above the planet, but the satellite will naturally and gradually descend to 249 miles (400 km) throughout its orbit this year. Each of these microsatellites carries 400 of the mysterious glow-balls. Satellites will release up to 20 of these balls during each “meteor shower” event, so each microsatellite would be capable of putting on 20 to 30 events, the start-up says. According to the statement, ALE hopes to put on the first of these artificial meteor showers in the spring of 2020, with more to come, including plans for a second launch later this year. Hiroshima was chosen for the viewing site of the inaugural artificial meteor shower because of its good weather, the topographical landscape, and its culture, ALE CEO Lena Okajima said. If the sky is clear for the event, millions of people in Hiroshima could witness the world’s first artificial meteor shower.