The new research may have dramatic implications for theories about both dark matter and galaxy formation. 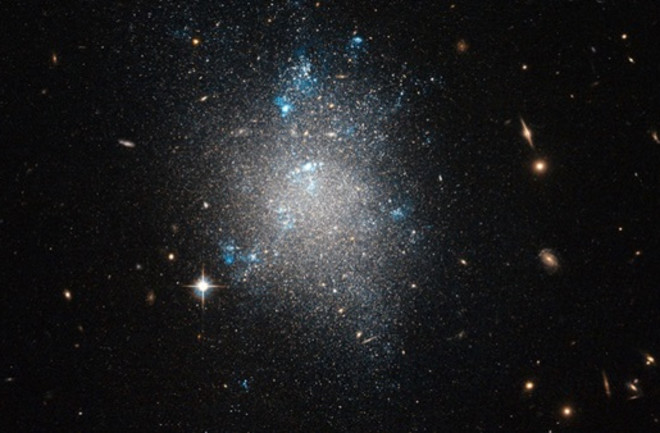 Dwarf galaxy NGC 5477, seen here in this image from Hubble, is like most galaxies: It has much more dark matter than regular matter. But the recent discovery of 19 dwarf galaxies missing most of their dark matter may force astronomers to reconsider how such galaxies form in the first place. (Credit: Hubble/ESA/NASA)

Astronomers have discovered 19 more galaxies missing their dark matter. Instead of dark matter, these strange galaxies are mainly filled with regular matter, like the protons, neutrons, and electrons that make up everything we're familiar with.

The new find, published November 26 in Nature Astronomy, bolsters the controversial recent discovery of two other galaxies without dark matter. The mysterious substance accounts for most matter in the universe, and it's thought to be the primary component of all galaxies — as well as the main driver of galaxy formation in the first place. So, finding so many galaxies without the exotic matter suggests astronomers are missing something major about how galaxies form and evolve.

"This result is very hard to explain using the standard galaxy formation model," said lead author Qi Guo of the Chinese Academy of Science in a press release, "and thus encourages people to revisit the nature of dark matter.

In the late 1970s, astronomers Vera Rubin and Kent Ford of the Carnegie Institution observed our most well-known galactic neighbor: the Andromeda galaxy. And when they did, they discovered that the galaxy wasn't rotating the way they expected. In our solar system, the planets rotate around the Sun at different rates. Close-in Mercury moves much quicker than distant Neptune. However, in Andromeda, the visible stuff on the galaxy's outer rim moves just as fast as the stuff orbiting near the galaxy's core.

Rubin and Ford were perplexed. It meant the Andromeda galaxy must be saturated with huge amounts of invisible matter, stretching far from the galaxy's center. Ultimately, their discovery turned out to be the first direct evidence for dark matter.

Over the ensuing decades, astronomers realized that every galaxy seemed to be chock-full of dark matter, a substance that doesn't interact with regular matter or light, except through the force of gravity. Then, in 2018, researchers led by Pieter van Dokkum of Yale University found a bizarre, ghostly galaxy named NGC 1052-DF2 that seemed to contain very little, if any, dark matter.

"We thought that every galaxy had dark matter and that dark matter is how a galaxy begins," van Dokkum said in a press release after the discovery. "This invisible, mysterious substance is the most dominant aspect of any galaxy. So finding a galaxy without it is unexpected. It challenges the standard ideas of how we think galaxies work, and it shows that dark matter is real: it has its own separate existence apart from other components of galaxies."

Just a few months later, van Dokkum and his team uncovered a second galaxy without any appreciable dark matter: NGC 1052-DF4. And like NGC 1052-DF2, this ultra-diffuse galaxy raised a lot of eyebrows in the astronomical community.

One critic was astronomer Ignacio Trujillo of the Instituto de Astrofisica de Canarias in Spain.

"Something that caught my attention very early on was the fact that the galaxy [DF2] was not only anomalous for not having dark matter, but also for having an extraordinarily bright population of globular clusters," Trujillo told Astronomy. "I remember thinking: 'Two anomalies at the same time really looks odd.'"

But after an academic back-in-forth, where Trujillo and van Dokkum traded salvos in the form of research papers, the answer to whether these galaxies are really missing their dark matter still remains uncertain.

The latest batch of galaxies missing dark matter was discovered when Guo and her team explored the nature of 324 dwarf galaxies using data from the Arecibo Observatory in Puerto Rico and the Sloan Digital Sky Survey. With this data, they followed in the footsteps of Rubin and Ford, studying how fast hydrogen gas rotates around each galaxy. They also calculated how much normal matter — in the form of both gas and stars — they contained.

After crunching the numbers, Guo and her colleagues determined that, of the 324 dwarf galaxies they investigated, 19 of them contain enough visible matter to solely explain the motions of the galaxies' hydrogen. In other words, a lot of dark matter seems to be missing from these galaxies.

According to the study, "Our results suggest that a population of dwarf galaxies could form in a particular way such that much less dark matter is required than for those in the Local Group [our cosmic neighborhood] and those found in simulations."

And what's the significance of finding galaxies without dark matter? According to van Dokkum, it would mean that astronomers don't really understand how galaxies form in the first place. Scientists currently suspect galaxies only form when the gravity from copious amounts of dark matter attracts the gas and dust needed to kick-start star formation.

"The thing is, we have no idea how star formation would proceed in the absence of dark matter," van Dokkum explained. "All we can say is that there must have been very dense gas early on in their history." Otherwise, the galaxies wouldn't be able to create any new stars.

Moving forward, Guo and her team say that astronomers need to do more work to map the motions of hydrogen gas within these galaxies. And with that, they hope to learn more about how these galaxies without dark matter came to be in the first place.