Scientists Catch Another Gravitational Wave, And They Know Where It Came From 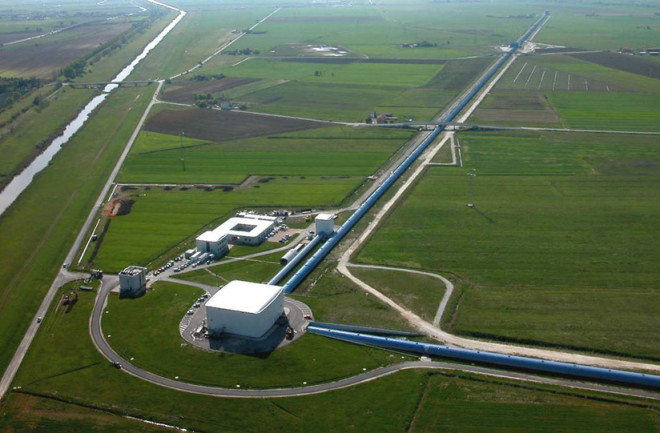 VRIGO (Credit: Wikimedia Commons) Last year, physicists made history by observing the first-ever gravitational wave. Their discovery confirmed Albert Einstein’s century-old theory of gravity and capped decades of effort to build an instrument sensitive enough to catch these ripples in spacetime. Since then, researchers working at the government-funded Laser Interferometer Gravitational Wave Observatory (LIGO) — twin detectors in Louisiana and Washington State — have caught several more gravitational waves. At a press conference Wednesday in Italy, the team announced a fourth detection from two colliding black holes, each dozens of times more massive than our sun. And for the first time, they had the benefit of three gravitational wave detectors. Italy’s version of LIGO — called Virgo — came online Aug. 1 following massive upgrades. And it took just two weeks for the Italian gravitational wave detector to prove its worth. The research was published online in the journal Physical Review Letters.

On Aug. 14, a gravitational wave passed over Earth at the speed of light, reaching Washington, then Louisiana and finally, Italy. Compared to the other fundamental forces, gravity is actually very weak, so only extreme events like colliding black holes produce detectable waves. Those waves warp the very fabric of space, but are so tiny that they’d alter the distance between Earth and the sun by just the width of a hydrogen atom. So scientists were somewhat surprised that Virgo, which was still being commissioned, was already sensitive enough to detect gravitational waves. But having a third detector let the team use the time difference between the gravitational wave's arrival at each site to figure out exactly where the signal came from. This signal emerged from the constellation Eridanus. They could already tell how far away the collision happened, but LIGOs twin detectors could only narrow the direction of origin down to a vast ring in Earth’s sky — they couldn’t tell where the signal was coming from. “That’s very important to us,” says LIGO physicist Jolien Creighton of the University of Wisconsin-Milwaukee. It allows the LIGO collaboration to loop in more traditional telescopes so they can turn their instruments in that direction and search for a corresponding light signal. “The great advantage that having Virgo brings is it has now three different times, which allows you to triangulate to a point on the sky,” Creighton says. “That brought the area it could have been from about 1,000 square degrees in the sky down to about 60 square degrees.” For perspective, the moon covers less than one square degree of Earth’s sky. With this latest gravitational wave, computers picked up on the signal less than a minute after it arrived at Earth. And 25 telescopes — everything from gamma and x-ray telescopes to neutrino observatories — then looked to see if they could see any light from these colliding black holes. Theory suggests that kind of collision wouldn’t put out any light, but if it did it could tell us something new about the cosmos. Another advantage of Virgo’s triangulation is that physicists were able to deduce how the gravitational wave was polarized. Einstein’s general relativity theory only allows for two types of gravitational wave polarization, but other theories imply as many as six different polarizations. The gravitational wave’s polarization last month was one of the two that meshes with general relativity, providing yet another sign that Einstein got it right a century ago.