By Louise Lief Every day, it seems, brings more dispiriting news to the science world. The head of the Environmental Protection Agency is removing research scientists from the agency’s advisory boards and has forbidden some of them from speaking at conferences. The Government Accounting Office is investigating reports that the current administration is violating scientific integrity policies at federal agencies. The Trump administration has proposed deep budget cuts at scientific agencies. But scientists’ problems run deeper. According to a number of recent surveys, there has been a rapid decline in knowledge about and sympathy for scientists and the institutions where many of them work, particularly among Republican and Republican-leaning voters. Politicians from the same party who now govern in over 32 states, the White House, and Congress are aware of these sentiments. A June 2017 survey by the Pew Research Center found 58 percent of Republicans and Republican-leaning voters felt colleges and universities are having a negative impact on the country, a 13 point increase since its September 2016 survey. 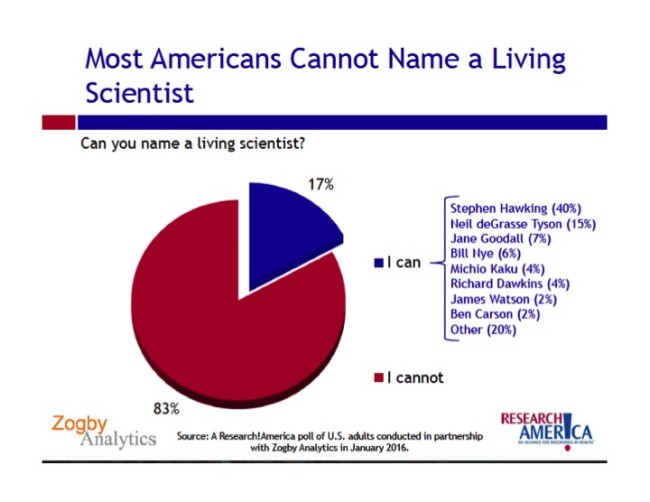 In 2011, 66 percent of Americans surveyed could not name one living scientist. In 2016, 83 percent could not name one. Credit: Research!America 2016 In 2011, a poll by Research!America found that 66 percent of Americans surveyed could not name one living scientist. At the time there was much dismay at this state of affairs. In 2016 Research!America asked the question again, and the results were much worse. Today, 83 percent of Americans polled cannot name a single living scientist, a 17-point increase in just five years. The latest survey was taken 10 months before the last presidential election. There are other troubling issues embedded in the results. Of the handful of scientists the public can identify (right), where are the women? Where is climate science? It’s hard to recall a time when has there been such doubt about the benefit of scientific methods and the evidence-based approaches that underpin scientists’ work. A 2017 RAND report cited “a growing trend toward public skepticism and mistrust of science itself as an objective input into decision making.” Though scientists are speaking out, when 83 percent of the American public can’t name one scientist, who is listening? These developments point to an urgent need for the scientific community to rethink the enterprise and reintroduce science to the public as a trusted, non-partisan civic actor, a collaborator that can help communities address their problems, and partners in a dialogue where each party brings its unique lived experiences to the table. Scientists need to create more portals to the public, and the citizen science community may be best situated to lead this transformation. As a lay observer who has explored scientists’ relationship to the public, I have often wondered why many scientists and scientific institutions continue to rely on what is known as the “deficit model” of science communication, despite its well-documented shortcomings and even a backfire effect. This approach views the public as “empty vessels” or “warped minds” ready to be set straight with facts. Perhaps many scientists continue to use it because it’s familiar and mimics classroom instruction. But it’s not doing the job. 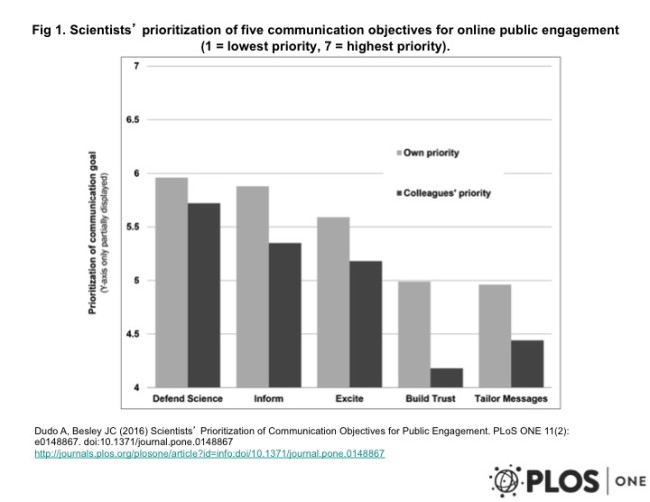 Scientists spend much of their time with the public defending science, and little time building trust. Many scientists also give low priority to trust building. At the 2016 American Association for the Advancement of Science conference, Michigan State University professor John C. Besley showed these results (right) of a survey of scientists’ priorities for engaging with the public online. Scientists are focusing on the frustrating, reactive task of defending science, spending little time establishing bonds of trust with the public, which comes in last as a professional priority. How much more productive their interactions with the public – and through them, policymakers -- would be if establishing trust was a top priority! There is evidence that the public is hungry for such exchanges. When Research!America asked the public in 2016 how important is it for scientists to inform elected officials and the public about their research and its impact on society, 84 percent said it was very or somewhat important -- a number that ironically mirrors the percentage of Americans who cannot name a scientist. I have met many scientists eager to take part in such dialogues with communities, particularly younger scientists who have come of age in the digital era amidst the doubts about the scientific enterprise. But many of them fear they will jeopardize their career prospects by spending too much time with the public. That’s the message they’re getting from many of their host institutions. A couple of years ago, at a talk by a major science organization that offered science communication training on university campuses, I was flabbergasted to learn that some lab directors would not allow their staff to attend such workshops. They were told it wasn’t relevant to their jobs, and that if they wanted such training, they should do it on their own time. None of the scientists in the audience seemed surprised by this. In another instance, an early-career chemistry professor who had had some success in major media said his tenure review panel scolded him for blogging too much. 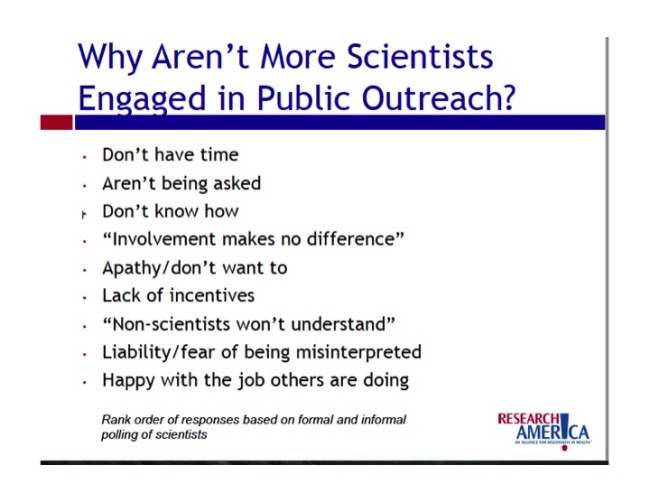 The top reasons scientists give for not engaging with the public, in order of importance. In its report Public Trust in Science Research!America surveyed scientists to discover the reasons more of them don’t engage with the public, listing the results in order of their perceived importance (see right). Seen another way, it’s an urgent To-Do list for scientific leadership across a range of disciplines. It’s their job to remove these barriers and encourage public engagement. Unless academe provides more encouragement and professional incentives for such efforts, the critical dialogues and community exchanges the public is asking for will not happen on the scale that is required. And without public understanding and support for their endeavors, research funds will dwindle. It’s already happening. Recently, I have focused on civic engagement, studying how communities try to identify and address collective problems and apply collaborative problem solving. There is a central role for scientists in this effort. At a February 2017 forum, The Aspen Institute’s Citizenship and Identity Program launched a science and civics initiative to consider such issues. The underlying premise was that scientific and civic literacy are intertwined and that currently, there are gaps in both. Participants included Citizen Science Association vice board chair and Public Lab executive director Shannon Dosemagen. She noted a “dangerous disconnect,” between scientists studying certain issues and the people living those issues. Forum participants called on scientists to do more to center their efforts around “community needs, interests and values,” to focus more on “deep listening,” and to be prepared to acknowledge that sometimes their assumptions about a community may be wrong. Being able to do this relies on meeting communities where they are. At a convening of the EPA’s National Advisory Council for Environmental Policy and Technology (NACEPT) during the Obama administration, when citizen science and open data movements were gaining steam, then-EPA science advisor Thomas A. Burke, a former New Jersey deputy health commissioner, called on citizen science researchers to query communities first rather than focus on projects that primarily address a researcher’s interests. Matthew Tejada, who worked on air pollution issues in the Houston-Galveston area before becoming director of the EPA’s Office of Environmental Justice, said communities want to focus on identifying problems and taking action to solve them. If neighborhoods are organizing and mobilizing to collect data, he said, everyone needs to be clear about how the data will be used. (Dosemagen and Darlene Cavalier of SciStarter are on the EPA’s NACEPT committee. Here is a copy of the 2016 NACEPT report, “Environmental Protection Belongs to the Public, a Vision for Citizen Science at the EPA”.) To better introduce themselves to the public, it makes sense for scientists to work with civic institutions the public already trusts. Arizona State University’s efforts to partner with  local public libraries is one such step that helps root citizen science programs in communities, creating a natural alliance of knowledge seekers, science, and public engagement, and establishing community feedback loops. (Full disclosure, Cavalier is the PI of this initiative, supported by the Institute for Museum and Library Services.) The Smithsonian Institution, the world’s largest museum and research complex, is leveraging its institutional credibility to promote productive civic discourse, convening public conversations on contentious issues like immigration. In a recent POLITICO interview, Smithsonian Secretary David Skorton, himself a scientist, addressed public skepticism of scientific findings, which he said was “nothing new.” On what to do about it, he put it this way, “As unpopular as this may be with my fellow scientists, I think it largely our responsibility, the scientists’ responsibility...” This means scientists need to go even further, venturing into unfamiliar local venues where science may not be mentioned but where communities gather to discuss their problems. Interesting new opportunities to do this are emerging nation wide. In 2014 the Chicago Community Trust, one of the nation’s largest community foundations, launched a series of dinners across the city through a program called On the Table, to discuss community problems and brainstorm possible solutions. In 2014, the first year, almost 10,000 city residents participated. In 2017, almost 100,000 Chicago residents took part. Recently the Trust added a grants component to the program, awarding more than $135,000 in small grants to help participants translate their ideas into action. Similar events now take place in 25 other cities, and under the auspices of other philanthropies like the Knight Foundation. Scientists need to be present at these tables, and practice those deep listening skills. At a minimum you will meet new people and gain new insights. But you may also make valuable new connections, find new collaborators, and most important of all, forge stronger bonds with your community. Don’t underestimate the power of the data you collect and create to impact community decision making. As Skorton says, it’s up to the scientists. It may not seem fair that it’s all on you, but here we are. Then again, scientists explore the unknown. It’s what you do. Go explore some more.

Louise Lief was Scholar-in-Residence at the American University School of Communication Investigative Reporting Workshop from 2015-2017. Previously, she was a public policy scholar at the Wilson Center, affiliated with the Science and Technology Innovation Program and the Environmental Change and Security Program. Want more citizen science? Check out SciStarter's Project Finder! With 1100+ citizen science projects spanning every field of research, task and age group, there's something for everyone!