Reality Check: The Universe Is (Probably) Not a Hologram 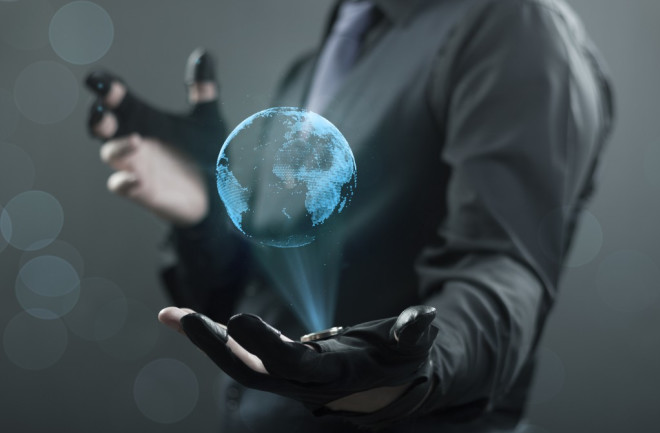 (Credit: dim4ik-69/shutterstock) Sometimes science gives us mind-blowing results that fundamentally force us to revise our perception of the universe we inhabit. From discovering that Earth is a sphere to the theory of special relativity, science has readjusted our grasp of reality time and again. This is not one of those times. Researchers at the Fermi National Accelerator Laboratory in Illinois recently carried out an experiment to prove whether or not the entire universe, as we know it, is nothing more than a hologram. To find evidence of our holographic existence, researchers used a so-called Holometer to probe for the universe's "pixels." Long story short, they didn't find what they were looking for.

The Universe as a Hologram

The Holometer experiment is based on the holographic principle, the groundwork for which was laid in in the 1970s by physicist Gerard 't Hooft. The holographic principle is an offshoot of the study of black hole thermodynamics pioneered by Stephen Hawking, and it attempted to rationalize the second law of thermodynamics with the idea that nothing can escape a black hole. There are several competing theories, which use classical mechanical theory, as opposed to quantum, to determine the entropy of a black hole. Entropy is a measure of how dispersed the particles in a system are, and is often used as a measure of the energy contained in a system. These theories suggest that the total entropy of a black hole is larger than its surface area would allow, ultimately contradicting the notion that the boundary of a black hole contains all of its information. Hooft's work led to the idea that the capacity of a black hole is given by its surface area, not its volume. This suggests that all of the information for a system, such as a black hole, or even our entire universe, is contained on the boundary of a system.The principle is referred to as holographic because it entails transferring information about a 3-D object onto a 2-D surface. Traditional holograms work in the same way: An object is reflected onto a 2-D surface while still providing the illusion of depth. Therefore, under the holographic principle, all that we know and feel originates from a parallel existence that's getting projected onto a 2-D surface and reflected back to us.

The experiment at Fermilab was the first of its kind to measure the paranoia-inducing-theory that our actions are a projection from a 2-D sphere surrounding our entire universe. The researchers hypothesized that our universe is made up of tiny packets of data many times smaller than an atom, or "pixels." They suggested that the existence of these pixels should create a limit of precision in our world, just as the number of pixels on a computer screen limits its level of detail. The theory also holds that there should be "quantum jitter" among theses particles that a specialized instrument could detect.

An overhead view shows the two vacuum vessels for the two interferometers. (Credit: Fermilab) To test their theory, the researchers used a device called a laser interferometer, which splits a laser beam and sends it down two 40-meter-long tunnels to reflect off a mirror and back again. This allows them to measure the distance the beam has traveled, and if their theory was correct, there should be small discrepancies detected in the distances between mirrors.

Ultimately, the experiment turned up nothing of the sort. The laser beams stayed right where they were supposed to. It's a result that shouldn't surprise anyone, and physicist Sabine Hossenfelder made it abundantly clear why in a 2012 blog post:

"The idea that space may be digital is a fringe idea of a fringe idea of a speculative subfield of a subfield. I'm not saying it's not interesting. I'm just saying if you'd actually go and ask a representative sample of physicists, I guess you'd find that most don't care about the holographic principle and wouldn't agree on any statement about it."

However, Craig Hogan, the head of Fermilab’s Center for Particle Astrophysics and leader of the experiment, has not been deterred. “The first step to do is to do what we've already done, but do more of it—we need to run longer and look more sensitively," Hogan told

"This result is based only on about 150 hours of data, so in a few months we'll have a larger data set and we'll be able to nail it—maybe we'll have a more conclusive statement to make." Indeed, another failed experiment using laser interferometers led to the theory of special relativity and the advent of modern physics. Hogan frames the results as just another step in the process of probing the deeper layers of the universe. “It’s new technology, and the Holometer is just the first example of a new way of studying exotic correlations,” he told Symmetry. “It is just the first glimpse through a newly invented microscope.”