Decades in the making, NASA’s latest flagship space telescope has finally kicked off its ambitious mission. 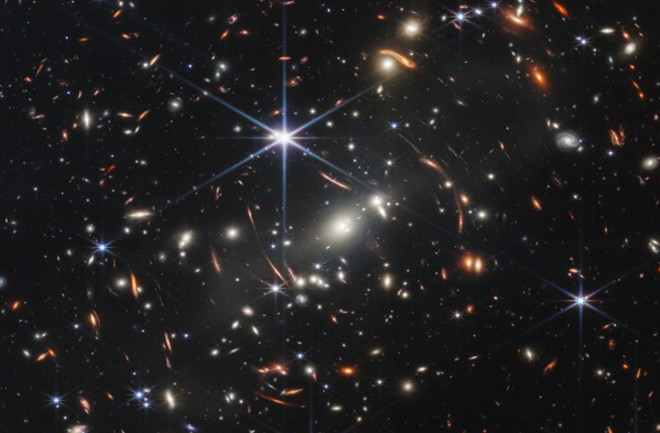 The spectacular image, taken by JWST's Near-Infrared Camera (NIRCam) is the highest resolution image of the infrared universe ever seen. Thanks to a serendipitous alignment, the images shows SMACS 0723, a massive galaxy cluster in the foreground that is magnifying and distorting our view of more distant cosmic objects located behind it. The phenomenon that makes this possible is called gravitational lensing, and it allows astronomers to study the most distant galaxies in the universe, those that would otherwise remain beyond the reach of even the most powerful telescopes.

“If you held a grain of sand on the tip of your finger at arm’s length, that is the part of the universe you're seeing — just one little speck of the universe,” said NASA Administrator Bill Nelson. Thanks to a phenomenon known as gravitational lensing, where massive collections of galaxies in the foreground serve as magnifying lenses for more distant objects, “we’re looking back more than 13 billion years,” Nelson said.

NASA plans to release the four other images and data that comprise JWST’s first set of science observations tomorrow (July 12) at 9:30 A.M. CT. You can watch the image release live below, courtesy of NASA TV.

The first batch of JWST science images are expected to focus on a slew of different cosmic objects, ranging from nebulae to exoplanets to some of the most distant galaxies in the universe.

"The release of Webb’s first full-color images will offer a unique moment for us all to stop and marvel at a view humanity has never seen before,” said Eric Smith, a program scientist for JWST at NASA Headquarters in Washington, in a NASA press release. “These images will be the culmination of decades of dedication, talent, and dreams – but they will also be just the beginning.”

“These images are going to remind the world that America can do big things," Biden said during today's announcement. "And they’ll remind the American people, especially our children, that there is nothing beyond our capacity — nothing beyond our capacity. We can see possibilities no one has ever seen before. We can go places no one has ever gone before.”

According to NASA, the first set of science targets will include the following objects.

Located some 7,600 light-years away in the constellation Carina the Keel, the Carina Nebula is one of the largest and brightest star-forming regions in the Milky Way, stretching some 300 light-years across. JWST’s infrared vision allows it to cut through the nebula’s cool gas and dust, which largely block visual observations, revealing a detailed view of what’s going on inside. Populated with many massive stars, the Carina Nebula is also home to the famed star Eta Carina, which violently erupted in 1837, briefly becoming the brightest star in the southern sky.

Located some 1,150 light-years from Earth, the gas giant WASP-96 b is slightly wider, but roughly half the mass, of Jupiter. But what makes this world particularly intriguing is that it orbits very near its star, circling its host once every 3.4 days. First discovered in 2014 via the transit method, in 2018, the presence of ample sodium helped astronomers determined WASP-96 likely has a clear, cloud-free atmosphere. JWST will not directly image this planet, but instead collect a detail spectrum of its light, hinting at the chemical components that make up its atmosphere.

The Southern Ring Nebula, sometimes called the Eight-Burst Nebula due to its resemblance to a figure-8 when viewed through a telescope, is a popular amateur target. This expanding cloud of gas, called a planetary nebula, is the result of a dying star that is blowing off its outer layers. Located some 2,000 light-years away, the nebula is now nearly half a light-year in diameter, and it continues to grow every day. Cosmically speaking, planetary nebulae don’t last very long, remaining visible for only about 10,000 years.

The five galaxies that make up the famed, compact group known as Stephan’s Quintet were first observed back in 1877 by French astronomer Édouard Jean-Marie Stephan. With the majority of the quintet located some 290 million light-years away in the constellation Pegasus, this galactic grouping is particularly intriguing because four of the five galaxies are gravitationally interacting as they repeatedly dance around one another. In 2000, the Hubble Space Telescope resolved individual stars in NGC 7320, but not the other galaxies, proving NGC 7320 resides significantly closer to Earth than the other four galaxies.

Much more yet to come

With a final price tag of $10 billion, the James Webb Space Telescope has some lofty expectations to live up to. But with enough fuel to last some two decades, barring any major issues, JWST is expected to return unprecedented observations of the cosmos for many years to come, keeping astronomers busy for decades.

So, pace yourself. After all, like the Hubble Space Telescope has done for the past 30 years, JWST is now running a marathon, not a sprint.

This article was originally published on Astronomy.com.