Oh, Texas, this guy runs your school board?

If you ever want to see just how far people will go to deny reality and promote antiscience, then look no further than dyed-in-the-wool creationist Don McLeroy, who is the Chairman of the Texas State Board of Education. This has to be watched to be, well, believed: Yes, someone has to stand up to experts! Because what do they know with all their facts, research, data, and, um, expertise? Wow. Simply wow. Mind you, there were some issues with McLeroy's nomination recently to stay as head of the Board but, bowing to pressure from the far-right religious faction in Texas, the state senate nomination committee has put his name on the floor for confirmation. PZ has the details. I'll add here, once again, that I am not attacking Texas as a whole. That would be foolish. I am however attacking those in power who would use that power to teach that which is clearly wrong, attack that which is clearly right, and thinly disguise what they're trying to do: overthrow the First Amendment and instate a theocracy. It's really just that simple. 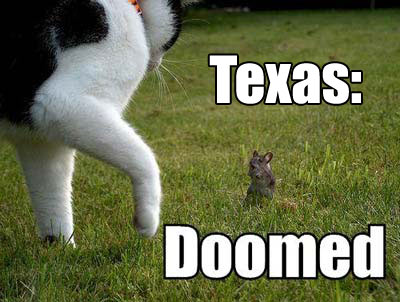 Tip o' the ten gallon (yet empty) hat to Robert Luhn, Director of Communications for the NCSE.