Let's say you wanted to know whether a certain concept was being invoked more frequently in the public sphere these days than it had been in the recent past. You might, for example, look at the archives of the New York Times, and ask how many articles mentioned that concept. But there's an obvious problem: maybe there are just more or fewer articles in the NYT from year to year. So you want to control for that. But maybe you don't know the total number of articles. So the sensible strategy is to pick some other word that should appear with the same frequency from year to year, and divide the number of articles with you meaning-laden word by the number with that neutral word. Here, from Eric Rauchway at Edge of the American West, is the ratio of appearances of the word "God" to the word "January" in the New York Times, between 1901 and 2005. Methodology borrowed from Gentzkow, Glaeser, and Goldin. Click for closeup. 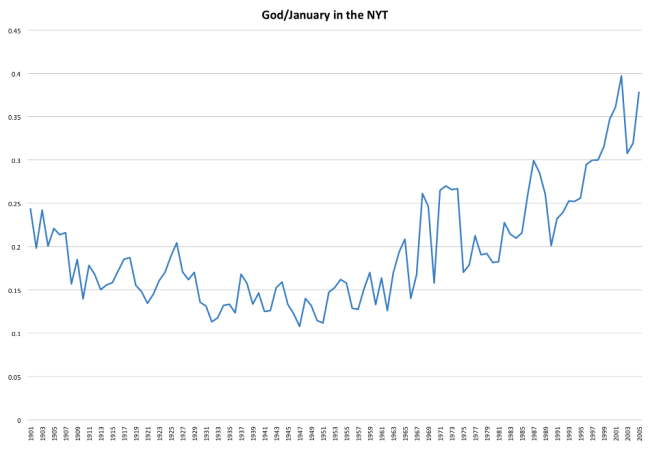 I'm still not sure about the choice of "January," though; see original thread for methodological hashing-out. What if there are more articles in the sports section, and they tend to refer to dates more frequently? Also, we seem to be talking about God a lot more these days.