No Such Thing as a Black Hole?

New theories question just about everything we thought we knew about nature’s bottomless pits. 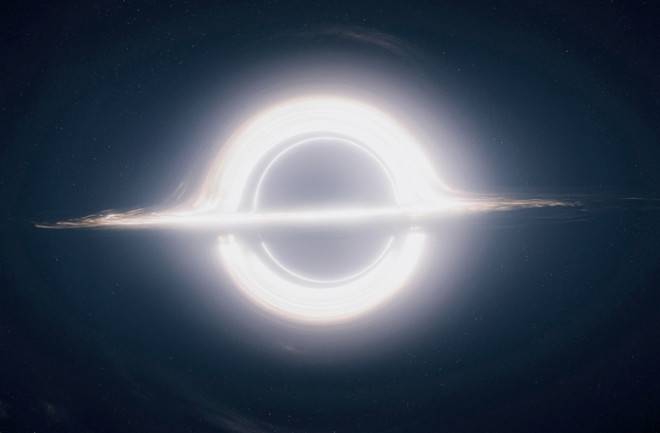 The black hole from Interstellar is based on current theory, but that theory may not match reality. (Double Negative/Paramount/Warner Brothers)

It takes a special kind of personality to argue passionately about the nature of objects that are hundreds of trillions of miles away, impossible to see and impossible even to describe using the known laws of physics. And yet, in the woolly world of modern astrophysics, such personalities are not in short supply. Lately they’ve engaged in a full-on debate about the nature of black holes, with some of the most fundamental notions about these strange objects suddenly under attack. Despite what you saw in the movie Interstellar, black holes may not be black, and they may not be holes, either. Some theorists argue that the event horizon of a black hole — the boundary where light, matter and Matthew McConaughey vanish from our universe — is actually a brilliant, blistering inferno. Others propose that black holes are more properly described as “gray holes” with fuzzy, leaky outer boundaries. And a few agitators argue that the whole debate is off track because nature makes it impossible for black holes to form in the first place.

All of which might seem like so much theoretical navel-gazing, except that the debate over black holes is a proxy in a much grander battle. Right now, physics is split in two: Quantum mechanics describes small, fast phenomena while general relativity describes large, slow ones.  But in the extreme conditions around a black hole, time and space get so stretched that the two theories are forced to overlap. Making sense of what happens at that intersection is crucial for developing a “theory of everything”— a unified set of physical laws that describe the entire cosmos, from the Big Bang to a Big Mac.

As material (dust in this illustration) falls toward a black hole, it heats up and emits radiation. No one knows what happens next. (Richard Kail/Science Source)

Fire in the Hole! The trouble began, like so many confounding concepts in modern physics, in the brain of Stephen Hawking. Four decades ago, he realized that a black hole’s event horizon is inherently leaky; quantum processes allow a slow but steady flow of particles away from the black hole, a process now known as Hawking radiation. Given enough time, a black hole can evaporate completely. The idea of matter escaping the alleged point-of-no-return was surprising (it’s a central plot point in that other recent movie about black holes, the biographical The Theory of Everything), but the fate of information that falls into the black hole was what really troubled Hawking’s colleagues.

In the current view, which Hawking helped formulate, every event in the universe contains quantum information. When objects fall into a black hole, they take their information with them. That’s fine so long as the information stays in there, but if the black hole evaporates, things go all wonky. Coherent information goes in, but what comes out is just noise — Hawking radiation is 100 percent content-free.  Falling into a black hole seems to destroy a slice of reality, which just makes no sense. Hawking and other theorists began searching desperately for ways to prevent information from getting into the black hole in the first place, for ways to let it back out, or even for ways to make peace with the possibility that some information really can be lost forever.

In 2012, Joseph Polchinski of the University of California, Santa Barbara, offered a novel solution: As soon as an object gets pulled across the event horizon, it hits a firewall — an inferno so intense that it erases all the quantum information that object contained. No information gets lost because no information actually makes it through to the black hole’s interior. Polchinski pictures the event horizon as a kind of quantum eraser that neatly makes the information paradox go away. If you think that sounds like a dodgy answer, rest assured that many of Polchinski’s colleagues (and even Polchinski himself) thought so, too — though perhaps not for the reasons you’d expect. The problem is that the rules of general relativity mandate physical continuity everywhere in the universe, even around a black hole. There should be no gap in the experience of, say, a doomed astronaut falling across the event horizon.

Or think of it this way: In relativity, the laws of physics look the same from all perspectives. The astronaut may get squished and stretched on the way in, but should still observe physics operating normally. The firewall, on the other hand, is about as abnormal and discontinuous as it gets. Now we’ve got a new paradox to deal with.  At this point, the story circles back to Hawking, who decided there must be a better way out. In a short paper presented last year, he suggests that the event horizon is not a defined boundary at all, but rather a zone of chaos where space and time are completely scrambled. No specific physical event occurs there — no Polchinski firewall — but any information passing through is rendered completely meaningless. Although Hawking dispenses with the traditional idea of the event horizon, he doesn’t dispute that black holes exist (as some breathless news stories claimed). Rather, he proposes that black holes are more like gray holes, defined by fuzzy edges that shed energy and garbled information.

My brain was starting to hurt, so I called on Juan Maldacena of the Institute for Advanced Study, a leading black hole theorist and a neutral third party. He doesn’t think much of the firewall concept because it fails miserably at the key task of reconciling quantum mechanics and relativity. “It’s telling us how not to do it,” he says. Does he like the Hawking approach, then? “No. He did not propose anything concrete,” Maldacena replies tersely.

When you are trying to solve the riddle of the black hole, nobody gets special treatment, not even Stephen Hawking. Event Horizon Denialists Here is where the deniers come in: If black holes keep sprouting paradoxes, the thinking goes, maybe the problem lies with our understanding of the black hole itself. I first encountered black hole denialism during a cosmology conversation with Laura Mersini-Houghton of the University of North Carolina, who mentioned, as a casual aside, “Oh, I also proved black holes don’t exist.” Over the past year, she has written two papers (one published, one in press) laying down the gauntlet.

Mersini-Houghton is flipping around Hawking’s old ideas. He considered the radiation released by black holes after they form. She looks instead at the radiation generated by a massive, collapsing object before it ever crosses the event horizon. In Mersini-Houghton’s analysis, the resulting energy and opposing pressure become so intense that it stops the infall, reverses it, and flings everything outward. The result is “fireworks, not firewalls,” as she puts it.

Event horizons, and the paradoxes that go with them, do not exist because the laws of physics guarantee that imploding stars self-destruct before they can become black holes. Cenalo Vaz, a physicist at the University of Cincinnati, recently came to similar conclusions by looking at outward pressure exerted by the structure of space around a collapsing object.

If black holes don’t exist, I ask Mersini-Houghton, what are those things at the hearts of most galaxies? Astronomers have found clear evidence of tiny but supermassive objects there, pulling on stars and stirring up hot disks of gas. Her answer cuts to the heart of one of the weirdest aspects of a black hole. As matter moves closer to the event horizon, time slows down from the perspective of an outside observer — that is, from the perspective of us and everyone else on the outside. At the horizon itself, time appears to us to come to a dead halt.

Even if matter never quite reaches the horizon, as in Mersini-Houghton’s theory, time could be stretched so drastically that a sudden rebound or explosion (from the collapsing object’s perspective) might look like a single, motionless moment (from ours).

Put plainly: To a human observer, black holes do not exist because we can never see them form. In the traditional view, a star keeps collapsing past the event horizon down to a dot known as a singularity. In the dissenting view, the star collapses to the edge of the event horizon and then hovers there, or rebounds and explodes. But from our outside perspective, there is essentially no difference. All we see is a frozen frame when the star is infinitesimally close to the event horizon. An astronaut falling toward the star would know the answer instantly, but any message that he or she sent would take a near-infinite amount of time to reach us.

Nevertheless, because such an experience is possible, there must be a theory to describe it.

Maldacena, like most mainstream physicists, dismisses black hole denialism. The real way to make sense of all this black hole madness, he insists, is to address the underlying clashes between relativity and quantum physics. “A full theory of quantum gravity must resolve them,” he emphasizes. And that is, perhaps, the ultimate paradox of black holes: They embody our very deepest scientific understanding of how the universe works, and yet in many ways we do not understand them at all.