We know a lot about the T. rex that lived millions of years ago, but it’s still a wonder to scientists how it became the legendary predator. With a recent discovery, scientists may have found a missing link. 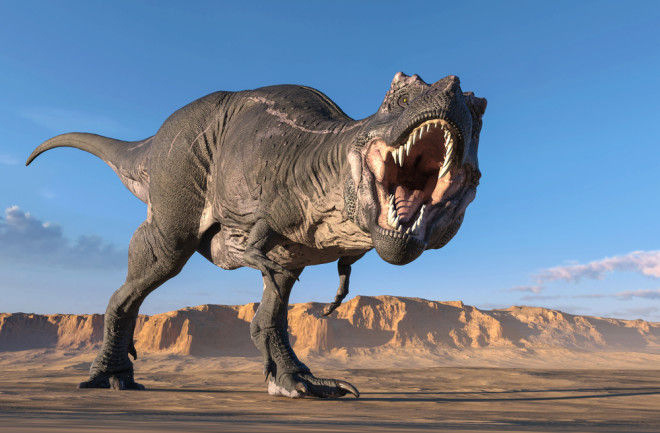 Tyrannosaurus rex is likely the most famous dinosaur known to man. Not only was this mega-beast the largest predator in its ecosystem, it also had teeth as long as your forearm and a bite force to match. It could eat prey as big as a school bus and did so for at least 2 million years. It was still standing until the end of the age of dinosaurs when an asteroid decimated the planet. Still, while we know a good bit about T. rex, we know comparably little about its evolutionary history.

According to the paper, D. wilsoni “displays a unique combination of ancestral and derived characteristics” that shows it was an intermediate species before T. rex, that lived 76 million years ago.

“We named a species that fits into the genus Daspletosaurus that forms a half way point between the two other species (D. torosus and D. horneri),” says Elías Warshaw, study author and a research associate at Badlands Dinosaur Museum in Dickinson, North Dakota.

Looking Back at T. Rex

Like T. rex, D. wilsoni would have been the largest predator living in the area, feeding on huge duck billed and horned herbivores like Brachylophosaurus and Centrosaurus. Additionally, the world would have looked different than it does today.

“Seventy-six million years ago Montana and large swaths of North America were covered in a swallow large inland sea called the Western Interior Sea,” says Warshaw. The area where the team recovered D. wilsoni would have been coastal at the time that the dinosaur lived. “I would compare it to a modern-day Louisiana but with dinosaurs,” he says.

Researchers think that D. wilsoni was another link in the chain that would lead up to T. rex, which would come 10 million years later and would grow into a larger animal with smaller horns. This paper, along with much of Warshaw’s research, shows that Daspletosaurus did not go extinct, but rather evolved into T. rex.

Still, there’s a lot we don’t know because of a lack of research, says Warshaw. “There’s a gap of several million years between the last Daspletosaurus and the earliest T. rex.”

Mind the Gap of Evolution

While we’re not there yet, we’re getting closer, says Scott Persons, head curator of the Mace Brown Museum of Natural History in Charleston, South Carolina, who was not involved in the study. This research proves an important link.

“The cool thing about this study is that they have this new definable species of Daspletosaurus that falls smack dab between the previously two known species – both because it shows up at an intermediate point in time and in terms of its evolutionary relationships,” says Persons. “The species has a mixture of new and old features that also show that it’s somewhere in between.”

And for Warshaw and the team at Badlands Dinosaur Museum, this research is about much more than uncovering a new species, it’s about showing the mode of evolution between dinosaurs. The process, called anagenesis, proposes that one species evolved into another.

The team is showing that before the Chicxulub crater 66 million years ago, many dinosaurs didn’t go extinct, rather, “their replacements are descendants that evolved into one another,” Warshaw says. This would apply to many more species than just that of the world’s most famous mega-predator.