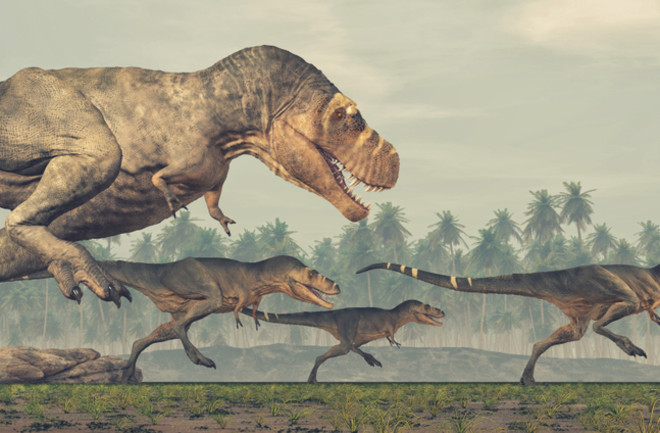 Tyrannosaurus rex is one of the most famous predators to walk the Earth. Taller than a three-story building with a bite so strong it could crush cars; T. rex was one of the last surviving dinosaurs in the Upper Cretaceous period. The species is well known because it’s a fascinating creature and because paleontologists have found more T. rex specimens than most species of dinosaurs. But new research is shining a different light on this ferocious beast.

A research study published in the journal Evolutionary Biology found that T. rex may be three different species. According to researchers, T. rex exhibits a large degree of “proportional variations,” and therefore, it’s likely to be multiple species.

"Scientists have long noted that there’s a lot of variability within [T. rex], especially in the robustness of the skeleton and in the teeth," says study author Scott Persons, an assistant professor of paleontology at College of Charleston in Charleston, South Carolina.

Variation Within the Species

Persons says that researchers looked at the skeletal thickness of the upper femur and the teeth in the lower jaw. Then they compared their findings to the geological time period when the T. rex specimen would have been living. And finally, they compared the amount of variability within other species like the Allosaurus, another theropod carnivore, to decide how much variability to expect within other carnivore species.

"We found significantly less variability amongst the bones of Allosaurus versus what we saw in [T. rex]," says Persons.

While Persons has an exciting conclusion, it’s nonetheless controversial. Many researchers are slow to adopt the study’s findings and Persons says there’s a number of potential reasons why. "By dinosaur standards, we have a relatively good sample size, 30 or so good quality specimens, but it’s still limited in its numbers," he says.

The smaller sample size limits the strength of statistical results. But as new specimens are found, it presents another opportunity to compare new results to this hypothesis, says Persons. Additionally, he says, what constitutes a species has been another point of contention amongst paleontologists.

"Modern biologists can come up with a relatively simple conclusion of what makes up a species based on those that can successfully reproduce," says Persons. "But we can’t know whether certain dinosaurs were able to reproduce, so we have to make inferences."

These inferences can leave many scientists unconvinced. Stephen Brusatte is a paleontologist and evolutionary biologist who wasn’t involved in the study. He says that the variation isn’t significant enough to call them separate species.

"I understand the temptation to divide T. rex into different species, because there is some variation in the fossil bones that we have. But ultimately, to me, this variation is very minor and not indicative of meaningful biological separation of distinct species that can be defined based on clear, explicit, consistent differences," says Brusatte. "Dividing T. rex into three species based on measurements from 38 bones just isn't a strong enough case for me."

Brusatte agrees that it fundamentally comes down to how a species is defined and scientists need more evidence to make this conclusion. But for now, scientists like Brusatte dispute Persons’ conclusions.

"It's hard to define a species, even for animals today, and these fossils have no genetic evidence that can test whether these were truly separate populations. Until I see much stronger evidence, these are all still T. rex to me, and that's what I'll be calling them," says Brusatte.