Infants' suckling responses to the flavor of alcohol in mothers' milk.

"Contrary to medical folklore, previous research has demonstrated that alcohol consumption by lactating women diminished milk intake by their infants during breast feeding. To determine whether this decrease in milk consumption was due to the infants responding to the altered flavor of the milk that also resulted, we evaluated the infants' intake and sucking responses to alcohol-flavored human milk outside of the context of breast feeding... ...There was no suppression of sucking or intake in response to the ethanol-flavored milk. Rather, the infants consumed significantly more and sucked more frequently when drinking the alcohol-flavored milk compared with the unaltered milk." 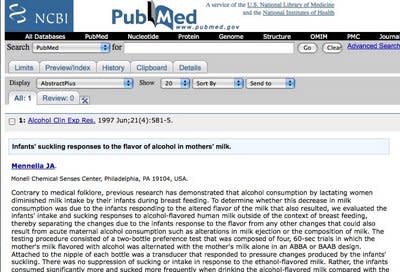 Thanks to Jason for today's ROFL!