NASA Once Made an Official Ruling on Women and Pantsuits 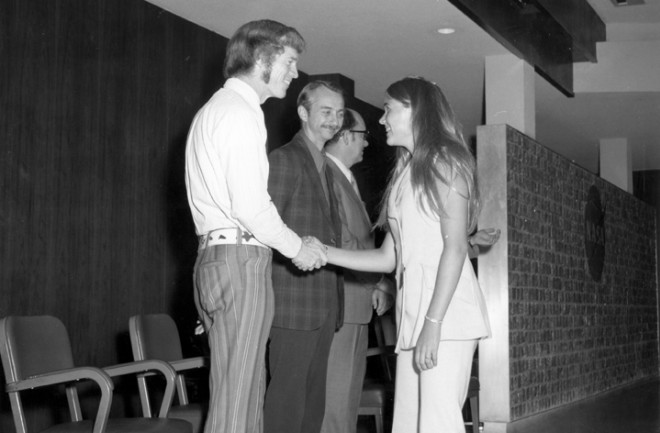 In 1970, NASA’s Goddard Spaceflight Centre was forced to address a tricky new issue in the realm of women in space: the validity of pants in the workplace.

Women and pants have a strange relationship throughout the 20th century, and further back, too, though for the moment we aren’t going to get into Joan of Arc wearing men’s armour. Pants — or trousers or slacks — began the last century as men’s clothing, but it wasn’t long before exceptions started to appear in the form of athletic wear.  In the 1920s, women could wear knee-length bloomers or knickers while playing sports, though even this purposely use of traditionally men’s clothing didn’t protect women from drawing negative attention.

Nevertheless, women began favouring slacks in the 1920s and 1930s for comfort (and also pockets) often with disastrous results. In 1938, kindergarten teacher Helen Hulick was held in contempt and given a five-day jail sentence for appearing in court in slacks. And she wasn’t on trial — she was testifying against a burglar! She ultimately testified… in a jail-issued dress. In the years that followed, women working in factories or serving as aviators were able to wear pants or coveralls because it was far more convenient and safe than wearing a dress around machinery.

But a handful of actresses began to shift the perception of women in pants around the same time. Kate Hepburn, Greta Garbo, Marlene Dietrich, Mozelle Britton, and Fay Wray were all stars who opted for slacks over the traditional dresses; Hepburn’s propensity for pants ultimately became one of her most distinctive characteristics. But while celebrities were able to continue dressing in slacks, it didn’t change the reality that ordinary women risked imprisonment for wearing pants as late as the 1960s. It was deemed indecent, the formal charge often being “masquerading as men.”

By 1970, however, the second wave of feminism had begun to shift the perception of women in pants in earnest. Not only could women wear slacks, but jeans were also acceptable, and the pantsuit was becoming a symbol of power. The suit, the incredibly masculine symbol of power, now had a feminine counterpart. 1970 was also the year the pantsuit revolution hit NASA.

Last year, I spent a solid four days in the NASA archives researching for my new book (more on that later) and among the unrelated but fascinating things I found was this memo to “All Goddard Girls” with the subject line “Pant Suits.”

In short, the memo asked all women at Goddard to consider whether they thought pant suits were really appropriate, not only as women in science but as women working for the US Government. The memo ends allowing for  “If you feel that pantsuits will not be offensive to your boss and would not embarrass him when he has outside visitors, I see no objection to your wearing such outfits.”

The whole of it is here:

Sources: Some links are in the body of the post; Odd Girls and Twilight Lovers: A History of Lesbian Life in Twentieth-Century America By Lillian Faderman; NASA Archives.