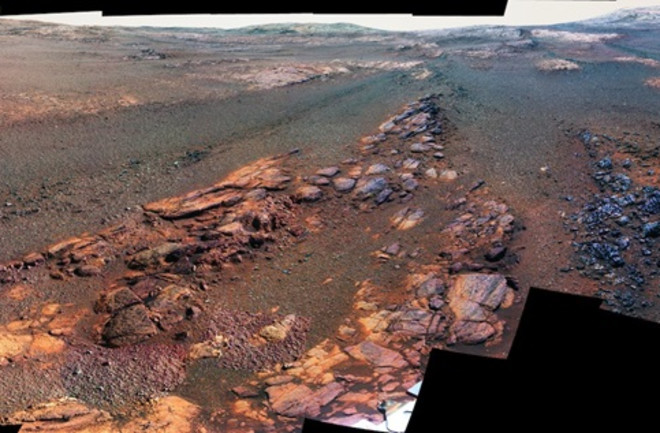 This small section of the Opportunity rover's final panorama highlights the different types of rocks found on Mars. To the left are tabular rocks, which tend to be thin and flat, and to the right are pitted rocks, which have compositions unlike any rocks previously seen during the mission. (Credit: NASA/JPL-Caltech/Cornell/ASU)

Last June, space exploration enthusiasts from across the world collectively held their breath as a global dust storm enveloped Mars. They did so not because our view of the Red Planet’s surface was obscured, but instead because a go-kart-sized rover named Opportunity, which had been roaming the Red Planet for nearly 15 years, fell silent as the storm intensified. After eight months of fruitless attempts to resurrect “Oppy,” which was only slated for a mission lasting 90 days, on February 13, NASA scientists finally declared: “Mission complete.”

However, although Opportunity is now forever resting in peace, just before the massive martian storm struck, the tenacious rover managed to capture one final panorama of the Red Planet — and it’s glorious.

After nearly 15 years exploring the Red Planet, the Opportunity rover captured the images for what would be its final panorama from May 13 to June 10, 2018. (Credit:NASA/JPL-Caltech/Cornell/ASU)

The sprawling, 360-degree panorama above — which is composed of 354 individual shots captured by Opportunity’s Panoramic Camera (Pancam) between May 13 and June 10, 2018 — shows a whole host of intriguing features near a site fittingly named Perseverance Valley. Located on the western rim of Endeavour Crater, this valley spans roughly 600 feet (182 meters) and contains many shallow channels sloping down from the crater’s rim to its floor. You can explore a higher resolution (and zoomable) version of the giant panorama on NASA’s website.

“This final panorama embodies what made our Opportunity rover such a remarkable mission of exploration and discovery,” said John Callas, Opportunity’s project manager, in a press release.

“To the right of center you can see the rim of Endeavour Crater rising in the distance,” he said. “Just to the left of that, rover tracks begin their descent from over the horizon and weave their way down to geological features that our scientists wanted to examine up close. And to the far right and left are the bottom of Perseverance Valley and the floor of Endeavour crater, pristine and unexplored, waiting for visits from future explorers.”

For the vast majority of the panorama, Opportunity utilized three filters to capture full-color images. But in the bottom left, you may notice a few frames are still in black and white. This is the result of the massive storm that ultimately took Opportunity out of commission last year. As the storm swept in, the solar panels that power Opportunity were covered in dust. This meant that the rover did not have enough juice remaining to capture its final few images using the Pancam’s green and violet filters.

Despite the fact that Opportunity is clearly not a living creature, its official demise last month sent ripples of sadness echoing through the astronomical community. However, according to Tanya Harrison, Director of Research for the “NewSpace” Initiative at ASU and Science Team Collaborator on the Mars Exploration Rover (MER) Opportunity, the rover’s tireless efforts to explore the Red Planet will not soon be forgotten.

“If I had the chance to say one last goodbye to Oppy, I would thank her for her tireless service above and beyond all possible expectations. There’s probably no more fitting way for her to have gone than in the strongest dust storm we’ve ever seen on Mars — for her, I would expect nothing less. Now she can rest, beneath a thin layer of dust, knowing she did humanity proud.”