Multiple “Mini-Moons” Could be Orbiting Earth 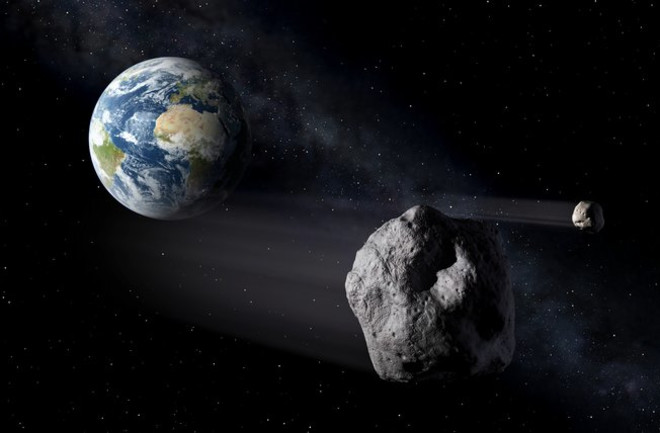 (Credit: ESA - P.Carril) Think that the Moon is the only object orbiting Earth? You might want to think again. Researchers have theorized the existence of “mini-moons” — tiny asteroids pulled into Earth’s orbit by forces of gravity — ever since discovering one with NASA’s Catalina Sky Survey in 2006. These fast moving asteroids revolve around the planet before either falling toward the surface as a meteor, or being ejected back out into space. But because of their small size and quick movements, no mini-moons have been detected since, leading many to wonder if more actually exist.

To squash doubt once and for all, the upcoming Large Synoptic Survey Telescope (LSST) is going to hunt down and track the orbits of these hidden visitors, giving insight into the mysterious nature of asteroids and their journeys through space. According to a comprehensive review of mini-moons, published in the Frontiers in Astronomy and Space Sciences in May, the orbital companions are only a few meters long and typically come from the asteroid belt between Mars and Jupiter. The gravitational pull of the Sun and the inner solar system's planets likely gradually draws the mini-moons out of the belt, allowing Earth to capture them as they pass by. Some end up making multiple trips around the planet, while others only make a partial revolution. But regardless of their trajectory, they meet with one of two fates: plummeting to Earth and disintegrating in its atmosphere, or escaping its gravitational pull. Whatever end they come to, the average mini-moon is thought to only spend about 9 months in Earth's orbit. It might not seem like long, but it gives us plenty of time to conduct some science. "At present we don't fully understand what asteroids are made of," said the review’s co-author, Mikael Granvik of the Luleå University of Technology, Sweden and the University of Helsinki, Finland, in a news release. "Missions typically return only tiny amounts of material to Earth. Meteorites provide an indirect way of analyzing asteroids, but Earth's atmosphere destroys weak materials when they pass through.” But with the help of the LSST, both of these setbacks could be evaded. The high-powered telescope, set to launch in 2022, will be equipped with a wide field camera, capable of surveying the whole sky once every week, and a 27-foot (8-meter) mirror that will pick up the subtle light given off by mini-moons, allowing researchers to easily locate them and track their orbits.

"Once we start finding mini-moons at a greater rate they will be perfect targets for satellite missions. We can launch short and therefore cheaper missions, using them as testbeds for larger space missions and providing an opportunity for the fledgling asteroid mining industry to test their technology," said the review's lead author, Robert Jedicke of the University of Hawaii, Honolulu. And since these satellite missions would bring asteroids to Earth in shielded spacecraft, they wouldn’t be damaged or stripped of any materials when they pass through the atmosphere. Being able to study larger asteroid samples in their natural states would help shed light on their compositions, the conditions that they formed in and how they've evolved since. But for now, we need to keep in mind that only one mini-moon has been detected so far, and that was over a decade ago. So until LSST proves the existence of these mysterious asteroids, the only orbiter we can count on is our proven, not-so-mini-Moon.