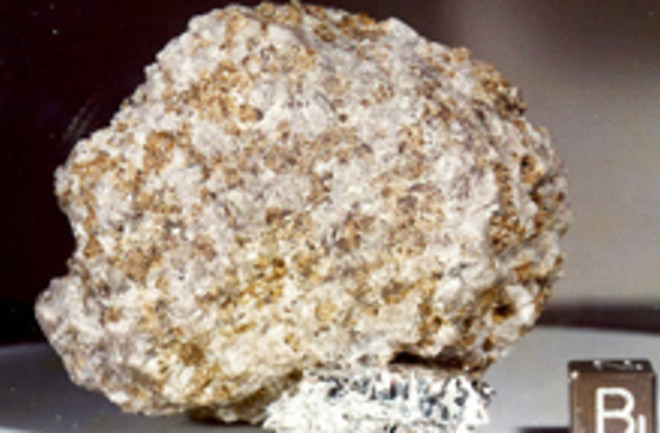 A tiny moon rock only two inches across that was picked up by one of the last astronauts to walk on the moon has given researchers new insight into the geological history of Earth’s satellite. The rock, scooped up during the Apollo 17 mission in 1972, is about 4.2 billion years old, and shows evidence that the moon once had a molten iron core that generated a magnetic field in the satellite’s early days. The findings are forcing researchers to rethink the prevailing notion that objects smaller than Mars can’t maintain a stable magnetic field.

Many of the rocks brought back from the Moon have a faint magnetic signal, suggesting that they originally cooled from magma when the Moon had a magnetic field. That was a surprise to many scientists who thought the Moon was too small and too cold to have ever possessed a geomagnetic dynamo where electric currents from the convection of molten iron generate a field [The New York Times]. But a molten core wasn’t the only explanation for the magnetic traces; some researchers thought that an intense bombardment of meteorites and asteroids created shocks that magnetized the rocks.

Previous studies of the ancient rock, known as troctolite 76535, had found no evidence that the rock had been altered by the force of an impact. The new research, published in Science [subscription required], adds further evidence to the theory that the young moon had a magnetic field of its own. Using an instrument called a rock magnetometer, researchers determined that the rock’s magnetic field formed as the rock originally crystallized 4.2 billion years ago. The magnetization appears to have been encoded in the rock during a period of cooling thousands of years long. That cooling time frame would not have allowed for meteoric impact magnetization, which usually fades within a day or so, to be locked in [Scientific American].

Lead researcher Ian Garrick-Bethell says the findings also raise questions about the moon’s current state. “If you could infer the moon had a liquid core in the past, you could infer that it still has a core today—a core doesn’t really go anywhere,” he says. “You might not be able to constrain whether it’s liquid or solid, but there are other studies that suggest that the moon presently may have a liquid core” [Scientific American]. However, if the moon does still have a liquid core it must have cooled down enough to halt the dynamo, because the moon boasts no magnetic field today.