Garbage zipping through space could shatter a spececraft or crash into Earth. 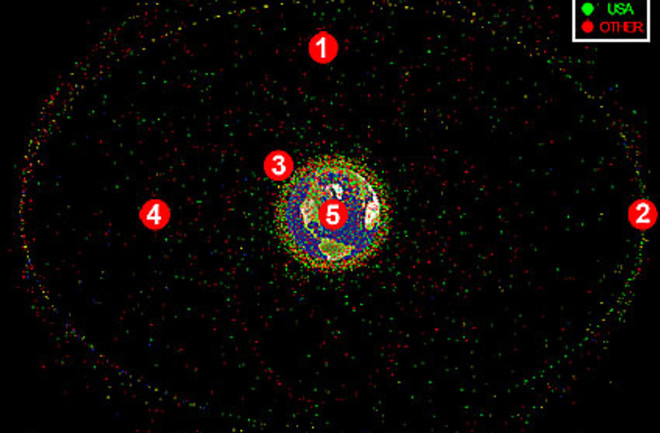 Tens of millions of trash pieces orbiting the Earth. Some of them are zooming faster than 17,000 miles per hour. | NASA

People have been launching objects into space for almost 50 years, creating an ever-expanding orbiting junkyard. The United States now tracks more than 10,000 pieces of debris four inches wide or larger, but tens of millions of smaller fragments are also whizzing through space at speeds that can exceed 17,000 miles per hour, says Mark Matney of NASA's Orbital Debris Program. At such speeds, a collision with even an apple-size object could shatter a spacecraft into hundreds of pieces.

Many of these objects—ones that tend to loop in a long oval around Earth's poles—are transfer stages from old Russian rockets. Rocket bodies represent about a fifth of cataloged space junk, abandoned satellites another fifth. Functioning spacecraft make up less than a tenth of the orbiting total.

Think of this ring, which contains geosynchronous satellites that travel with the planet so they always face the same site on Earth. When these stop functioning, their orbits drift into trajectories that can threaten other valuable instruments. Twice a day, the defunct objects tear through working spacecraft.

Near-Earth orbit is crowded with clutter from many scientific missions (like the Hubble Space Telescope), most manned spaceflights, and the International Space Station. The orbiting debris has included a glove and a spatula dropped by space-shuttle astronauts, bags of Mir's garbage, and the Russian radio transmitter in a space suit, SuitSat.

Although the United States and Russia lead the list of space junkers, other top contributors include the European Space Agency, Japan, France, India, and several companies.

Space agencies continue to monitor the debris as new objects are added every few days (from launches, collisions, and explosions) and old junk falls back through the atmosphere, which happens about once a day. Usually the debris burns up on reentry, but several 100-pound-plus fragments have crashed to Earth. Only one woman—in Tulsa, Oklahoma—is known to have been hit. As of now, there are no regulations controlling the generation of junk, only recommendations about minimizing it.