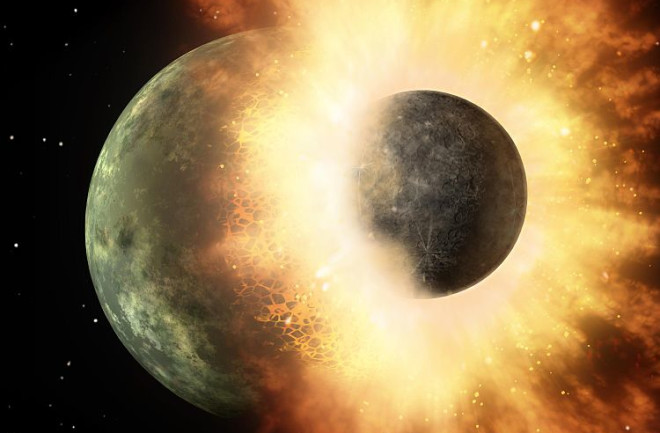 If the Earth were molten when it the impact occurred, it might be able to produce the moon we see today. (Credit: NASA/JPL-Caltech) For the past few decades, if you asked an astronomer how the moon was created, nearly all of them would tell you that a Mars-sized world nicknamed Theia crashed into the early Earth, sending a cloud of debris high into space where it coalesced into our silvery satellite. And there's strong evidence to support this idea. But dig deeper, and you'll find nagging problems with the theory. Almost all models of the giant impact imply that the moon should still contain a lot of Theia. But the more researchers study the chemical makeup of rocks from Earth and the moon, the more the two bodies seem alike, with no sign of Theia's chemical fingerprints. Now, a new study has re-imagined that impact with Theia slamming into an Earth and shows that if our world was covered with an enormous magma ocean at the time, it could solve the longstanding questions about how the moon formed.

A lot of the moon formation arguments over the past few decades have come down to very specific details of the Earth-Theia collision. But these small details have big consequences. If the two objects collided close to head-on, enough debris could have mixed to explain why Earth and the moon are so similar in composition. But if you run those calculations, the orbital math just doesn’t work out because the moon can’t settle into the orbit we observe today. If instead, astronomers change the collision to more of a sideswipe, then you can recreate the moon’s orbit, but you’re left with a moon that should have a lot more Theia in it than we observe. Another solution is to accept that maybe Theia was made of the same materials in the same proportions as Earth to begin with, but many astronomers aren’t comfortable with coincidence.

Read more: Everything Worth Knowing About The Moons of Our Solar System

Now, Natsuki Hosono, from Japan’s Agency for Marine-Earth Science and Technology, and a team of researchers have published a new theory in Nature Geoscience

that attempts a different solution. They suggest that if Earth were molten at the time of the Theia collision, instead of solid, then much more Earth material could be ejected into space, leaving the moon mostly made out of our planet instead of Theia. The molten Earth variation of the familiar impact story could also solve the puzzle of one the few differences in composition that does exist between Earth and its moon. The moon has a much higher iron oxide (FeO) concentration than Earth. But if large portions of the Earth were melted into liquid, that magma ocean should have a large amount of iron oxide compared to the Earth as a whole. Theia slamming into that ocean would send it soaring into space, where it could coalesce into the moon we see today. Hosono’s team used more detailed modeling than many past projects to show their work, lending it some weight. But the study is still unlikely to be the last word in such a long-standing debate over where exactly our moon came from.