A young Earth might have had a twin that eventually became our satellite. 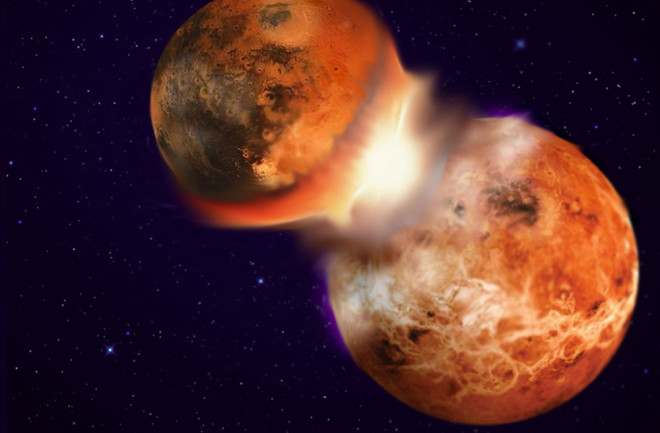 Scientists think the body that smashed into a nascent Earth, and eventually became the moon, was likely made of the same materials as our planet. (Credit: Hagai Perets)

The origin of Earth’s abnormally large moon is a long-standing mystery in astronomy. Most scientists believe our satellite formed from the remains of a small world called Theia after it smacked into Earth 4.5 billion years ago. Models show that chunks of the Mars-size interloper spun off and coalesced into the moon. So astronomers were puzzled when lunar samples returned by Apollo astronauts showed striking similarities to Earth rocks instead.

A moon rock recovered during the Apollo 16 mission puzzled researchers initially because its composition of a rare metal is identical to Earth's. (Credit: NASA/JSC)

In April, astrophysicists announced they’d found a possible reason: Theia was Earth’s twin. In a Nature study, scientists modeled the solar system’s birth and watched virtual worlds collide like wrecking balls. They found that Theia likely formed close to Earth and collected the same cosmic debris as it grew. It makes sense, then, that the moon, as a spinoff of Earth-like Theia, is made from the same stuff as our planet.

But that doesn’t tell the whole story, according to a University of Maryland study published the same month. Exploring why Earth and its moon both contain the same isotopes of the rare metal tungsten — something that couldn’t be explained by the Theia collision theory — the researchers’ model showed that after the moon formed, other nearby collisions blasted tungsten-containing debris onto both Earth and the newborn moon.