Look Up Into to the Starry Night for Science 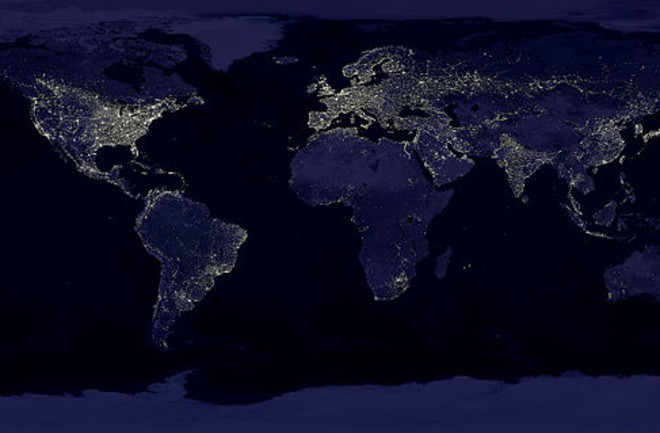 Composite image of the Earth at night (NASA)

Guest post by Christopher Kyba How many stars can you see when you look up at the night sky? The answer depends a bit on your vision and a lot on where you live. The bright sky over cities reduces the contrast between the stars and the spaces between them, making them difficult or impossible to see. It’s similar to how the noise from traffic makes it hard to hear singing birds. This phenomenon is known as light pollution and is of concern for both ecological and human health reasons. For example, the croaking of frogs and toads is a nighttime breeding ritual and artificial right disrupts this activity, reducing populations. Similarly, birds that migrate or hunt at night can have their navigation severely affected by artificial light. One way to find out the brightness of the sky is by measuring how bright the stars are. If you tell me the faintest star that you can see, I can tell you the sky brightness. So if your city is installing new LED streetlights, you can use the stars to track whether the sky gets darker or brighter! The most accurate way to measure the artificial night sky brightness is with expensive camera equipment, like the ones the US National Parks Service (NPS) developed for measuring skyglow in National Parks. But the NPS can’t be everywhere at once, and they also only operate inside the US.

Loss of the Night app asking a citizen scientist to search for Polaris. To get around this, projects like ‘Globe at Night’ and ‘How many stars’ asked citizen scientists to rate how bright skyglow is by choosing the map that best matches what their night sky looks like. A few years ago, we analyzed this data to test how accurate these observations are. We found that while the uncertainty on each individual observation is large, the average of many hundreds of observations is an extremely stable indicator of night sky brightness. This proved that citizen science observations could be used to track how skyglow is changing, although probably only on regional and global scales. Upon seeing these results we wondered, could we somehow empower individuals to accurately track how skyglow changes at the local level? This data could prove to be extremely useful and expand our knowledge of how humans are altering the world around us. After some thought, we decided the best way to do that would be to replace skyglow maps with a set of direct questions about specific stars: “Can you see Arcturus? Yes? Then what about Polaris?” This eventually led us to develop the Loss of the Night smartphone app with funding from the German Ministry for Education and Research. The Loss of the Night app works by directing your vision to a certain part of the sky. Once you are correctly oriented, you look away from the screen and into the sky, and check if you can see the suggested star with your own eyes. After you make your report, the app suggests a new star, and this continues until you have searched for at least 8 stars. The app turned three years old on April 22nd, and we’ve improved how it works, partly based on participant feedback. We’ve also recently developed a way for citizen scientists to access and analyze their own data. The image below shows the results from one set of observations.

Loss of the Night app observation displayed on www.myskyatnight.com. The higher up the stars appear on the magnitude scale, the fainter they are. The display also notes whether the user marked stars as visible or not. A white line shows the “naked eye limiting magnitude”, which tells us how bright the faintest star that this observer could see is. The number of visible stars increases exponentially with the limiting magnitude, and in this case observer could see about 200 stars. Since the app was first released, 14,271 different devices have sent us data. Much of it is from people just trying out the app in daytime, or using it in conditions that we can’t analyze, like when the moon is up. But so far participants have made close to 4,000 good observations, where at least 8 stars were observed, the data is self-consistent, and there was no twilight, moonlight, or clouds. We are currently heading towards new moon, so if you’d like to try the app out, you have until about May 7 to do so. The stars change over the course of the year, so if you like the app, help us do some great citizen science by observing your night sky a few times every year.

Christopher Kyba is the creator of the Loss of the Night app. He researches light pollution at the GFZ German Research Centre for Geosciences in Potsdam, Germany. Follow him on twitter @skyglowberlin