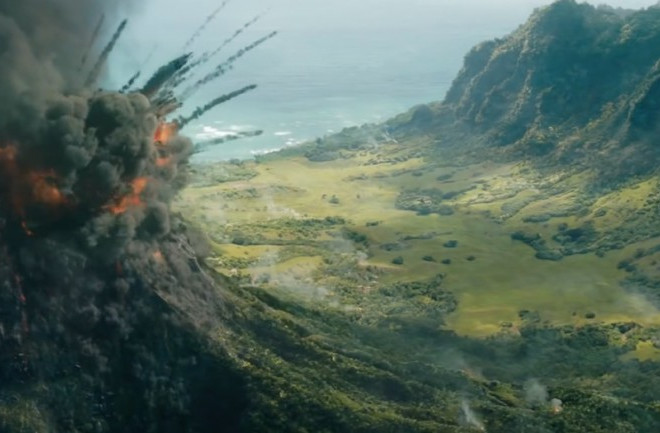 Sure, this is supposed to be Isla Nublar, but I'm pretty sure this is a valley on Oahu in Hawaii. A shot from the Jurassic World: Fallen Kingdom trailer. First off, don't get me wrong, I love crazy geo-related films. I'm not going to pull a Neil DeGrasse Tyson here and take all the fun out of a movie because it is horribly, fantastically wrong when it comes to the science ... but maybe we need to have a few words about

The first trailer came out yesterday and more or less, we can sum the movie up thusly: Dinosaurs versus the Volcano. From what I can gather, the plot involves trying to rescue dinosaurs from Isla Nublar because a volcano (who knew it was volcanic? And why would you put your Dino park there if it was?*) is about to go, as they say, "non-linear" and destroy them all. So, let's go save the raptors. * David Bressan reminded me that in the original novel for Jurassic Park, the park is powered by geothermal, so a volcanic island isn't entirely insane ... although apparently nobody did a hazard assessment. Now, I won't get into the geography problem here. Isla Nublar, from what I can tell, is located to the west of Costa Rica, and there are no volcanoes there. Sure, Costa Rica has volcanoes, but they are hundreds of kilometers to the east and if you examine a map of the Pacific plate, there isn't a volcano anywhere near our hypothetical dinosaur island. Anyhow ... if we ignore this fact, then lets look at the volcano itself, erupting in this shot:

The volcano in the Jurassic World: Fallen Kingdom trailer. Well, this volcano has a personality crisis. It's steep sides and ashy eruption suggest it is erupting sticky lava, maybe andesite? But no, we have narrow, snaking lava flows as well! The closest volcano equivalent I might suggest is Arenal in Costa Rica, but usually it has lava flows with small plumes, not lava flows and big explosions. Those combinations aren't common at all, especially with the streams of volcanic bombs being thrown from the volcano. Lava flows form from runny lava like basalt while big explosions come from stickier lava like andesite or rhyolite. Combining the two? Not so much.

Lava dripping into some facilities at the Jurassic World park. Of course, this scene suggests something entirely different. Red hot, very liquid lava is dripping into some facility. You can see some of our main characters behind this curtain of lava, only a few feet from it. Now, being someone who has been near an active lava flow ... and one far from the source not dripping from above my head ... I can tell you, it is stupendously hot. Basalt lava like this is likely around 1200ºC, so both the people and dinosaur would likely be very uncomfortable if not passing out from the heat (and maybe even the gases). How the lava is getting in like this is beyond me as well - maybe a bunker being covered by a flow? I hope you like baked dino!

Volcanic bombs flying in the Jurassic World: Fallen Kingdom trailer. If you ever find yourself in a situation where you are running from volcanic bombs, the key is actually to watch where they are falling and move out of the way. In the trailer, this bomb hits the ground and leave a massive crater. I'm guessing this would only happen in a place with loose soil, but many times volcanic bombs will make "cow pies" as they splat and hit the ground. It really takes soft or loose sediment for the bombs to make impact craters - and it is usually near the volcano or in squishy ocean or lake sediment.

T. rex winning the moment. Now, this still doesn't do it justice, but behind T. rex is a massive set of explosions coming from the side of the volcano (watch the trailer closely to see this), as it someone is setting off a chain of charges. This sort of behavior is highly unlikely without cracks likely having formed beforehand and usually, it is lava flows that come out, not big explosions. However, it does make a nice backdrop for the tyrant king.

This shot speaks for itself. I don't even know how I can comment on this shot. It is amazing. I'll leave it to the paleontologists to comment on the combination of dinosaurs and their relative speed compared to a pyroclastic flow (moving at ~300-500 mph/600 km/h). Hats off to you, bold film makers, for not knowing when to stop. However, speaking of pyroclastic flows...

Chris Pratt is doomed. Poor Chris Pratt. I mean, he's great, I love Andy Dwyer and Star-Lord. However, I'm sorry, Chris, but you're not outrunning this pyroclastic flow. No one is. That flow is ash, volcanic debris and volcanic gasses at between 700-1000ºC. In the next shots, we see poor Chris vanish into the pyroclastic flow.

Bye, Chris. And if he somehow survives this, well, I just don't know what to say. Johnny Karate would be proud. Otherwise, he ends up like many people in Pompeii (now, don't get me started about that movie). Even the survivor of the 1902 pyroclastic flow at Pelée on Martinique who was in a solid rock jail didn't fare too well. So, I am looking forward to this geologic maelstrom of dinosaurs and eruptions that Jurassic World: Fallen Kingdom looks like it will provide. I think it's safe to say, just like the paleontologists, us volcanologists shouldn't go in expecting accurate volcanology. There has never been a Hollywood film that has really done an eruption "right", and I'm still not quite sure why because eruptions are so dramatic that we don't need to make frankenvolcanoes that would never happen. However, it is science fiction, so lean on the fiction and try not to get too bogged down with the questionable science.