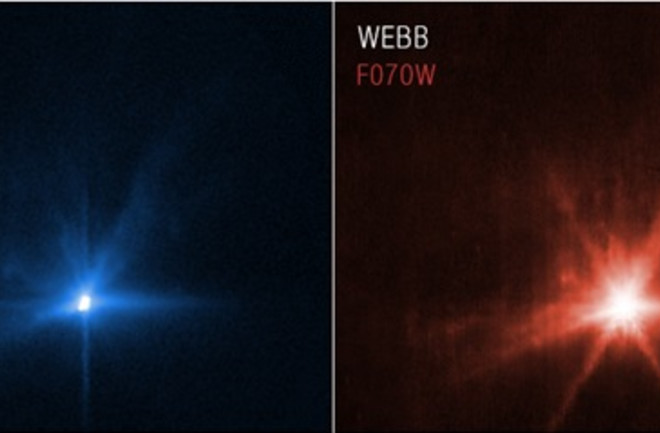 Zipping through space at some 14,000 mph (22,500 km/h), NASA’s DART spacecraft slammed into the surface of a small asteroid on Sept. 27, 2022. Despite the modest mass of the buggy-sized spacecraft, the collision ejected large plumes of material that caused the double-asteroid system to increase in brightness roughly threefold.

At various points before, during, or after the impact, the James Webb Space Telescope and the Hubble Space Telescope observed DART’s target: the tiny moonlet Dimorphos, which orbits a larger asteroid called Didymos.

Although James Webb and Hubble have already viewed some of the same celestial targets before, these DART images mark the first time the two space telescopes have teamed up to capture simultaneous observations of the same object.

These space-based observations of DART’s impact and the resulting debris cloud will provide astronomers with the data they need to better understand the nature of Dimorphos’ surface.

For instance, Webb and Hubble’s complementary coverage through multiple wavelengths will help reveal whether the collision threw off large chunks of rock and debris or primarily fine dust. That’s not only valuable for understanding the true nature of asteroids. It’s also vital to understanding how large and tightly bound the agglomerated material within asteroids is — as that may change the odds of success of a collision-based asteroid avoidance plan.

The James Webb Space Telescope observed DART’s collision with Dimorphos for a total of five hours, capturing 10 images. Meanwhile, Hubble captured 45 images immediately before and after the collision. Over the next three weeks, Hubble will continue to check in on Dimorphos 10 more times, monitoring how the ejecta clouds evolve and fade over time.

It could take weeks before astronomers are able to verify whether DART’s impact changed the orbital period of Dimorphos around Didymos, as intended. And it will be another two years before ESA launches the Hera mission to the system, which will carry out a detailed post-impact analysis of the binary asteroid.

Hera, like DART, is a mission supported by an international collaboration called the Asteroid Impact and Deflection Assessment, or AIDA. With these missions, scientists are working to develop and hone the techniques that may one day be necessary to prevent a potentially catastrophic asteroid strike on Earth.

After all, being prepared is half the battle.