Is Einstein's Greatest Work All Wrong — Because He Didn't Go Far Enough?

From a farmhouse in the English countryside, gentleman scientist Julian Barbour plots to take relativity to its logical extreme and redefine the very nature of gravity, space, and time. 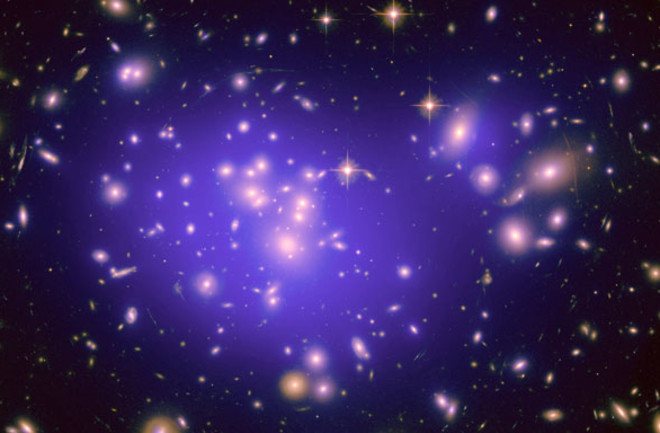 Galaxy cluster Abell 1689 seems to be held together by swaths of unseen dark matter; blue shows its theoretically inferred location. But could dark matter be an illusion? (Credit: NASA)

Julian Barbour cuts an unlikely figure for a radical. We sip afternoon tea at his farmhouse in the sleepy English village of South Newington, and he playfully quotes Faust: That I may understand whatever binds the world’s innermost core together, see all its workings, and its seeds. His love of Goethe’s classic poem, about a scholar who sells his soul to the devil in exchange for unlimited knowledge, is apropos.

Forty years ago, Barbour’s desire to uncover the innermost workings of the universe led him to make a seemingly reckless gamble. He sacrificed a secure and potentially prestigious career as an academic to strike out on independent research of his own. His starry-eyed quest: upending Albert Einstein’s theory of relativity, and with it our understanding of gravity, space, and time.

It was less than a century ago that Einstein was the most radical physics thinker around. With his general theory of relativity, he discarded the traditional notion of space and time as fixed and redefined them as flexible dimensions woven together to create a four-dimensional fabric that pervades the universe. In Einstein’s vision, this stretchy version of space-time is the source of gravity. The fabric bends and warps severely around massive objects such as the sun, drawing smaller objects such as planets toward them. The force that we perceive as gravity is the result.

Yet Einstein’s fabric left a few loose threads that cosmologists have struggled to tie up ever since. For one, general relativity alone cannot explain the observed motions of galaxies or the way the universe seems to expand. If Einstein’s model of gravity is correct, around 96 percent of the cosmos appears to be missing.

To make up the difference, cosmologists have posited two mysterious, invisible, and as yet unidentified ingredients: dark matter and dark energy, a double budget deficit that makes many scientists uncomfortable. Einstein also failed to deliver an all-encompassing theory of “quantum gravity” — one that reconciled the laws of gravity observed on the scale of stars and galaxies with the laws of quantum mechanics, the branch of physics that explains the behavior of particles in the subatomic realm.

While other scientists tread softly around the edges of Einstein’s theory, hoping to tweak it into compliance, Barbour and a growing cadre of collaborators see a need for a bold march forward. They aim to demolish the space-time fabric that stands as Einstein’s legacy and remap the universe without it. This new cosmic code could eliminate the need to invoke dark matter and dark energy. Even more exciting, it could also open the door to the theory of quantum gravity that Einstein was never able to derive. If Barbour is right, some of the most fundamental things cosmologists think they know about the origin and evolution of the universe would have to be revised.

“We have radically reformulated Einstein in a different light that might be valuable for understanding cosmology and quantum gravity,” Barbour says. “It is a very ambitious hope that it could play such a role.”

Barbour’s penchant for mapping space and time is apparent even before we meet. His home, College Farm, is hidden away some 20 miles from the nearest city of note, Oxford. Knowing that visitors often struggle to find the 17th-century farmhouse, he has sent two sets of directions.

The first includes detailed instructions for navigating through the village’s rolling hills along sunken roads, passing thatched cottages, the local Duck on the Pond pub, and the ancient church near his home. Those directions might have served equally well for locating Barbour’s house at the time it was built in 1659, a few decades before another English physicist, Isaac Newton, wrote his Principia, setting down the ideas about motion and gravity that dominated physics for almost three centuries.

In one respect Barbour has spent 40 years faithfully preserving Newton’s universe, meticulously restoring the farmhouse’s period features. He proudly shows me that each window frame is adorned with a small metal animal figure — a lion, a stag, a cockerel, and the flying horse Pegasus. The lion is Barbour’s favorite because it is original; the rest he had specially made based on designs seen in other buildings of the same era in the village. He taps the sturdy stone wall surrounding the window. “These were here 350 years before us and our modern conceptions of physics,” he tells me, “and chances are they’ll still be standing 350 years after we’ve gone.”

By contrast, the second set of directions for finding Barbour’s farmhouse — GPS coordinates — work only in the modern, post-Einstein reality. The satellite navigation system pinpoints positions on Earth to within 10 meters (30 feet) in a matter of seconds by comparing the timing of signals received from a number of satellites at known locations above the globe. The system works with such stunning accuracy because it compensates for the fact that clocks on fast-orbiting satellites run at different rates from those on the ground. The fact that gravity and motion affect the flow of time was discovered by Einstein as a core element of his theory of relativity.