Hunting Moons Outside the Solar System

Because planets aren't the only places we might find alien life... 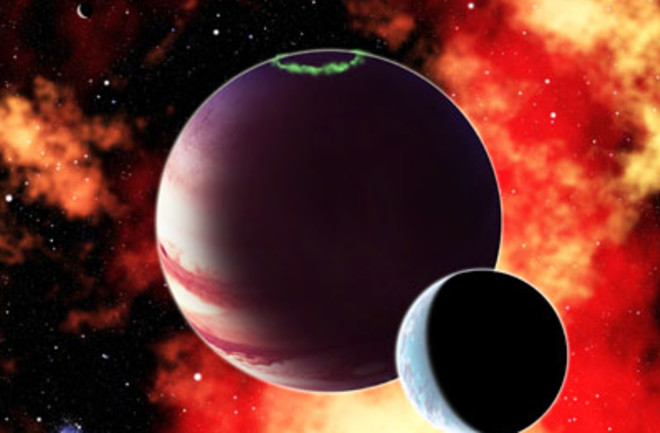 Artist's concept of a habitable moon orbiting a giant gas planet. Earth-like moons may be common through the galaxy. | David Aguilar/CFA

Astronomers are getting greedy. First they wanted to find planets around other stars; they succeeded and currently have more than 3,000 confirmed or likely candidates. Now they want to discover moons around those planets.

Detecting small objects that orbit other small objects trillions of miles away is an ambitious undertaking, but our solar system offers many reasons to try. Jupiter and Saturn together host more than 100 moons, and a few of those frigid worlds—Europa, Enceladus, and Titan—are among the most intriguing hunting grounds for alien life in the solar system. If conditions are similar around other stars and planets, there should be trillions of moons in our galaxy, with a small but significant percentage of them suitable for life.

At the Harvard-Smithsonian Center for Astrophysics, David Kipping has been thinking about finding faraway moons since 2007, before astronomers had the tools to detect them. Now he has the sensitive equipment he needs: NASA’s Kepler space telescope, which stares at stars and looks for subtle dips in brightness caused by planets crossing in front of the stars and blocking some of their light.

Kipping’s team is poring over thousands of those dips for evidence of accompanying moons. The researchers are looking for dips within the dips, which could indicate a moon appearing from behind a planet as it crosses the face of its star. They are also studying the length of time between dips—any variation suggests that a moon is exerting a gravitational nudge that slightly alters the planet’s orbit.

Earlier this year, Kipping’s team prioritized 100 planets for further study. Now they are feeding data into a program that will take two weeks or more per planet to search for the definitive signature of a moon.