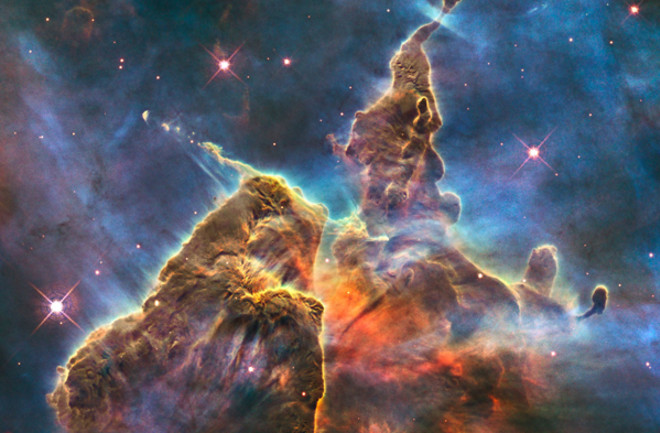 Happy birthday, old friend. Tomorrow marks 20 years since the space shuttle Discovery carried the Hubble Space Telescope into orbit. And to mark the occasion, NASA released the latest in a long line of incredibly gorgeous images of nebulae and star birth. This is the Carina nebula, which the telescope first shot in 2007.

“We wanted to have an image that will be at least as spectacular as the iconic ‘pillars of creation,’ says Mario Livio of the Space Telescope Science Institute in Baltimore, referring to a widely reproduced 1995 Hubble image of the Eagle Nebula. “This particular image can arguably be called ‘Eagle Nebula on steroids’” [Science News]

. This sweeping view comes thanks to the Wide Field Camera 3, installed during a Hubble upgrade last summer. There's plenty more Hubble love to go around. DISCOVER blogger Phil Plait promises a few surprises in his "Ten Things You Don't Know About Hubble." And if you've already seen the Eagle Nebula more times than you can count, check out our gallery of the most underrated Hubble images. Related Content: DISCOVER: Happy Birthday, Hubble: The Telescope's Most Underrated Images Bad Astronomy: Ten Things You Don't Know About Hubble 80beats: Prepare To Be Amazed: First Images from the Repaired Hubble Are Stunning 80beats: Hubble Spies Galaxies That Formed Just After the Big BangImage: NASA, ESA, M. Livio and the Hubble 20th Anniversary Team (STScI)