Hubble Reports First Ever Signs of Carbon Dioxide on an Exoplanet 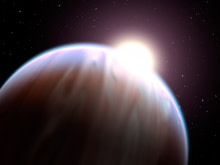 For the first time, carbon dioxide has been detected in the atmosphere of an exoplanet, astronomers working with

report. Although the Jupiter-sized planet, whichclosely orbits the starHD 189733 about 63 light-years from Earth,

is much too hot to support life, scientists are hailing the discovery as an exciting technical achievement.

“In that context, the carbon dioxide measurement constitutes a dress rehearsal …for our long-term goal of trying to detect signs of life or signs of habitability on terrestrial-mass planets or super Earths in the habitable zone,” [Science News] says Mark Swain of

NASA’s Jet Propulsion Laboratory. Researchers deduced the presence of carbon dioxide by measuring the planet's light spectrum with the Hubble's Near Infrared Camera and Multi-Object Spectrometer (NICMOS). To isolate the light spectrum coming from the planet, researchers used a method known as "secondary transit."

Their findings will be published in Astrophysical Journal Letters.

With the latest discovery,

"three of the Big Four biomarkers for habitable/inhabited worlds have now been seen: water, methane, and now carbon dioxide," though not all on the same exoplanet, says planet-formation theorist Alan Boss. "The only one that has not yet been detected is oxygen/ozone." [Space.com].