Asteroid strikes, supernovae blasts and other calamities could take out humanity. But no matter what, a cataclysmic event 1 billion years from now will rob the planet of oxygen, wiping out life. 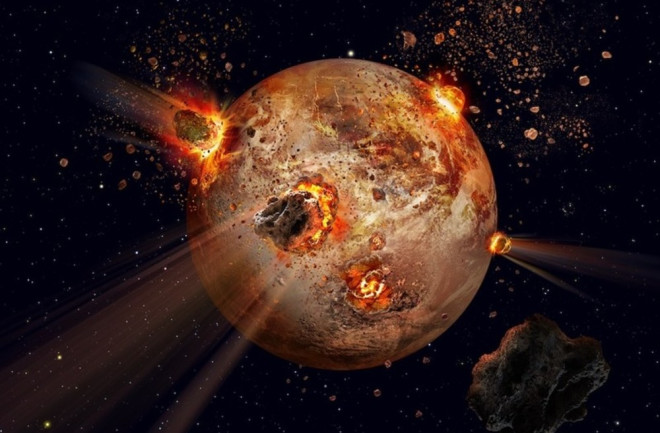 Life is resilient. The first living things on Earth appeared as far back as 4 billion years ago, according to some scientists. At the time, our planet was still being pummeled by huge space rocks. But life persisted anyway. And throughout Earth’s history, it’s seen all manner of cataclysms. Disparate doomsdays — from supernovae blasts and asteroid strikes to huge volcanic eruptions and sudden climate shifts — have killed countless lifeforms. And at times, those mass extinctions have even eliminated most species on Earth.

So, what would it take to kill off life in full? Well, it turns out that while humanity might be surprisingly fragile, it’s not easy to sterilize an entire planet. Nonetheless, below are just a few possible doomsday events that could permanently extinguish all life on Earth — and the last one is likely unavoidable.

This artist's illustration highlights the tremendous amount of energy released when an asteroid strikes a planet. (Credit: muratart/Shutterstock)

When a city-sized asteroid struck the Gulf of Mexico 66 million years ago, it was game over for the dinosaurs, as well as most other species on Earth at the time. And while our ancestors hadn’t yet evolved, the impact was perhaps the single most important event in human history. Without that asteroid strike, dinosaurs might have continued to rule the Earth, leaving us mammals still cowering in the shadows.

Humans, however, won’t always be on the winning side of such random events. A future asteroid could just as easily take out every person on Earth. Fortunately, that’s unlikely to happen anytime soon. Based on the geological record of cosmic impacts, Earth gets hit by a large asteroid roughly every 100 million years, according to NASA. However, smaller asteroid impacts do happen all the time. There’s even evidence that some people may have been killed by small meteorite impacts within the past few thousand years.

But what are the chances that our planet will ever be struck by an asteroid massive enough to wipe out all life on Earth? Simulations published in Nature back in 2017 suggest it would take a truly gigantic space rock to accomplish such a feat. Killing all life on Earth would require an impact that literally boils away the oceans. And only asteroids like Pallas and Vesta — the solar system’s largest — are big enough to do that. There is evidence that infant Earth was struck by a large planetoid called Theia. But these days, collisions of such large objects are extremely unlikely.

A fossil of a trilobite, one of Earth's earliest arthropods, is seen on display at the Shanghai Natural History Museum. Trilobites ruled the world during the Ordovician. (Credit: AKKHARAT JARUSILAWONG/Shutterstock)

For a more likely glimpse of an Earth-altering cataclysm, we need to look to the distant past.

Nearly 2.5 billion years ago, a period called the Great Oxidation Event gave us the breathable atmosphere we all now depend on. An eruption of cyanobacteria, sometimes called blue-green algae, filled our atmosphere with oxygen, creating a world where multicellular life-forms could take hold, and where creatures like humans could ultimately breathe.

However, one of Earth’s great die-offs, an event 450 million years ago called the Late Ordovician mass extinction, likely happened because the inverse took place. The planet saw a sudden drop in oxygen levels that lasted for several million years.

What could have caused such an extreme event? During the Ordovician period, the continents were one jumbled mass called Gondwana. Most life on Earth still lived in the oceans, but plants were beginning to emerge on land. Then, near the end of the Ordovician, a sweeping climate shift left the supercontinent covered with glaciers. That global cooling alone was enough to start killing off species.

But then a second pulse of the extinction ramped up as oxygen levels plummeted. Scientists see evidence of this shift in seafloor samples collected from around the world. Some researchers think that the glaciers were responsible for fundamentally changing the layers of the oceans, which have unique temperatures and specific concentrations of elements like oxygen. Yet, the exact cause of the oxygen drop is still up for debate.

Whatever the cause, the end result is that more than 80 percent of life on Earth died during the Late Ordovician mass extinction, according to some estimates.

So, it may have happened before, but could a deoxygenation event happen again? In an eerie comparison to today, researchers involved in the recent Nature Communications study say that climate change is already reducing oxygen levels in our oceans, potentially killing off marine species.

The bright beams of light dubbed gamma-ray bursts may originate in binary star systems, as shown in this illustration. (Credit: University of Warwick/Mark Garlick)

Even if a sudden spate of global cooling sparked the Late Ordovician mass extinction, what set that in motion in the first place? Over the years, numerous astronomers have suggested the culprit might have been a gamma-ray burst (GRB).

GRBs are mysterious events that seem to be the most violent and energetic explosions in the cosmos, and astronomers suspect they’re tied to extreme supernovas. However (and thankfully), we haven’t yet seen a burst close enough to us to fully understand what's going on. So far, GRBs have only been spotted in other galaxies.

But if one did happen in the Milky Way, as has likely happened in the past, it could cause a mass extinction on Earth. A GRB pointed in our direction might last just 10 seconds or so, but it could still destroy at least half Earth's ozone in that short period of time. As humans have learned in recent decades, even a relatively small amount of ozone depletion is enough to chip away at our planet’s natural sunscreen, causing serious problems. Wiping out the ozone on a large enough scale could wreak havoc on food chains, killing off huge numbers of species.

A GRB would wipe out the lifeforms that live in the upper levels of the ocean, which currently contribute significant amounts of oxygen to our atmosphere. And, it turns out, gamma rays also break apart atmospheric oxygen and nitrogen. These gasses get converted into nitrogen dioxide, which is more commonly known as the smog that blocks out the Sun above heavily polluted cities. Having this smog blanketing the entire Earth would block out sunshine and kickstart a global ice age.

End of the Sun

Any of the devastating scenarios above, while undoubtedly terrible for life, are just a fraction as bad as future Earth's ultimate fate. Gamma-ray burst or not, in about a billion years, most life on Earth will eventually die anyway due to a lack of oxygen. That’s according to a different study published in March in the journal Nature Geoscience.

The researchers suggest that our oxygen-rich atmosphere is not a permanent feature of the planet. Instead, in about a billion years, solar activity will cause atmospheric oxygen to plummet back down to the level it was at before the Great Oxidation Event. To determine this, the authors combined climate models and biogeochemistry models to simulate what will happen to the atmosphere as the Sun ages and puts out more energy.

They found that, eventually, Earth reaches a point where atmospheric carbon dioxide breaks down. At that point, oxygen-producing plants and organisms that rely on photosynthesis will die out. Our planet won’t have enough lifeforms to sustain the oxygen-rich atmosphere humans and other animals require.

The precise timing of when that starts and how long it takes — the deoxygenation process could take as few as 10,000 years — depends on a broad range of factors. But, in the end, the authors say this cataclysm is an unavoidable one for the planet.

Luckily, humanity still has another billion years to figure out other plans.