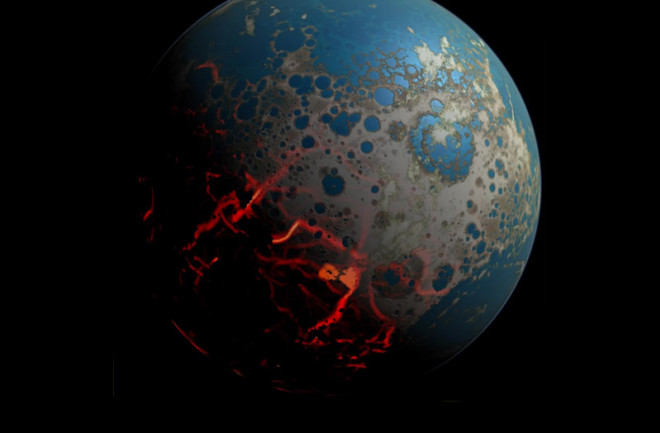 A NASA image depicts what planet Earth may have looked like some 4 billion years ago when it was getting pummeled with space rocks. (Credit: NASA)

The earliest lifeforms emerged at least 3.95 billion years ago, at a time when a near constant barrage of comets and asteroids were bombarding our still solidifying planet. That’s the implication of new research published in the journal Nature on Wednesday.

A group of Japanese scientists journeyed into a remote stretch of northern Labrador, Canada, where they chiseled samples from some of Earth’s oldest rocks. They braved bugs, bad weather and polar bears; they returned with what could be evidence for some of the oldest life on Earth.

The results are controversial — other experts doubt their dates. But they join a growing chorus of researchers pushing back the origin of life to a time when scientists once thought Earth would be uninhabitable.

“I would agree with their conclusion,” says Matthew Dodd of the University College London, who was not involved in this study. “However, for most people to be convinced, we’ll need to see some other elements.” That includes better dates and more corroborating evidence that it’s actually life.

Earth’s past is broken into four eons—we’re in the Phanerozoic right now. It began about 542 million years ago, which is right about the time life got complex enough for us to find fossils.

But the Hadean Eon was our planet’s first. Earth’s environment was so extreme that scientists named it after hell. Few rocks remain from the time period between when our planet formed roughly 4.5 billion years ago, and the time space rocks from the Late Heavy Bombardment stopped pummeling Earth some 3.8 billion years ago.

Was early Earth sterilized by impacts? Or did life thrive in these hellish conditions?

“If you want to understand anything about the origins of life on Earth or Mars—or whatever—you have to look at this rock record,” says Stephen Mojzsis, a geology professor at the University of Colorado and expert in ancient rocks in this region. “That’s the only direct line to those past times.”

Last September, researchers working in southwest Greenland announced they’d found 3.7-billion-year-old stromatolites, which are made by microbes living in shallow seas. And a paper published in Nature back in March claimed to find the oldest microfossils ever discovered on Earth within Canada’s Nuvvuagittuq Supracrustal Belt. Those researchers said their potential lifeforms lived between 3.8 billion and 4.3 billion years ago.

When the Japanese researchers in this current study, led by geologist Tsuyoshi Komiya from the University of Tokyo, examined their samples they spotted traces of life hidden inside. Those traces came in the form of biogenic graphite—rock that carries telltale signs it’s been modified by life.

“Over the billions of years since these rocks were laid down they’ve been subjected to heat and metamorphism which has converted this biological matter into graphite,” explains Dodd, who was lead author on the March study.

Instead of directly dating that graphite, the Japanese team relied on geological context.

“It is not necessary to directly date the age of samples with the graphite,” says Komiya, the study’s lead author. “Geology is also important.”

And while scientists might be willing to believe the rocks contain traces of life, some are seriously skeptical that the lifeforms lived 3.95 billion years ago.

“I’m disappointed,” Mojzsis says. “I would think that a study of this importance would have those data provided. In a rock such as this, it is so complex that on the scale of centimeters there could be differences in age of one or two billion years.”

Mojzsis says these ancient rock formations have been churned like salt-water taffy. They’ve been in Earth’s crust for so long that relatively newer material is now thoroughly mixed with older rock, making it incredibly difficult to tell one from the other.

Researchers have to pick apart their rock samples piece by piece and date each one individually, he says. These researchers didn’t do that, and don’t see it as essential to their study.

“Some caution is needed until the volcanic and sedimentary rocks that compose this sequence can be dated directly,” Caro says.

His own work nearby uncovered rocks no older than 3.78 billion years. And past research has provided dates hundreds of millions of years younger.

Craters on the Moon

Proving that life took root 3.95 billion years ago is vital to showing single-celled creatures evolved during the Late Heavy Bombardment and survived.

Most craters on the moon and Mercury formed between 3.8 and 4 billion years ago. And 3.95 billion years ago is when scientists now think one of the moon’s largest craters formed. In a study published in Nature last year, astronomers used a high-tech, 14-foot cannon to show that the Imbrium Basin, which stretches some 750 miles across, formed after a 150-mile-wide protoplanet the size of New Jersey smacked our satellite.

That finding rams home the idea that our solar system was full of enormous asteroids back then. If scientists can show life existed even then, it will prove the Earth wasn’t sterilized by the impacts.

There’s now also good reason to think asteroids and comets actually helped create environments where life could evolve. A drilling expedition to the dino-killing Chicxulub crater last year showed the impact crater itself would have been rich in hydrothermal activity—the kind of environment where many scientists think life first emerged.

“All of us—and especially lately—everyone is trying to push the envelope,” Mojzsis “But there are bits and pieces and scraps of evidence and so on—none of this is proof. We don’t have time machines that we can go back and see what happened.”