How to View the Best Meteor Shower Yet This Year 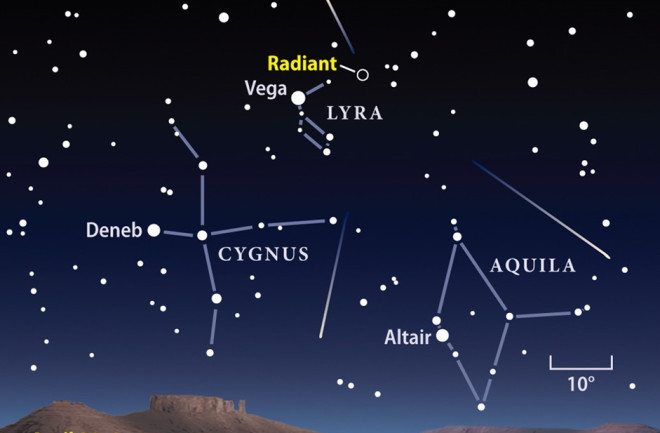 Credit: Astronomy Magazine/ Roen Kelly The peak of the first good meteor shower of the year will begin the night of April 22 and continue through the dark morning hours of the 23rd. The waxing crescent moon sets around midnight local daylight time, which leaves the prime viewing hours before dawn moon-free for the annual Lyrid meteor shower. Most meteor showers occur as Earth runs into streams of particles shed by comets. The particles enter our atmosphere, burn up due to friction, and produce an incandescent column of light. The parent comet of the Lyrid shower is Comet Thatcher (C/1861 G1), which orbits the sun every 415 years. This year, the Lyrid meteor shower will be active from April 16 through the 25th with the peak occurring in the hours before dawn April 23.

Astronomers evaluate meteor shower strengths by their hourly rates. The Lyrids typically deliver between 15 and 20 meteors per hour at their peak for observers at dark sites, which generally means 30 miles (50 kilometers) from city lights. This year could be better than average, however. Some meteor scientists predict enhanced rates in 2015, so it could pay dividends to be watching before dawn April 23.

The shower’s radiant — the point from which the meteors appear to emanate — lies in the constellation Lyra near that group’s brightest star, Vega. The radiant passes nearly overhead just before dawn. “Don’t stare at the radiant,” advises Astronomy Senior Editor Richard Talcott. “You’ll get your best results, and by that I mean the largest meteor counts, by looking roughly a third of the way across the sky from the radiant.” Viewers should look east, and you'll need no special equipment or optics. In fact, the eyes alone work best because they offer the largest possible field of view. A reclining lawn chair will help with comfort, as will a blanket and a warm beverage.