Definitions of past, present, and future get confusing when you venture deep into the cosmos 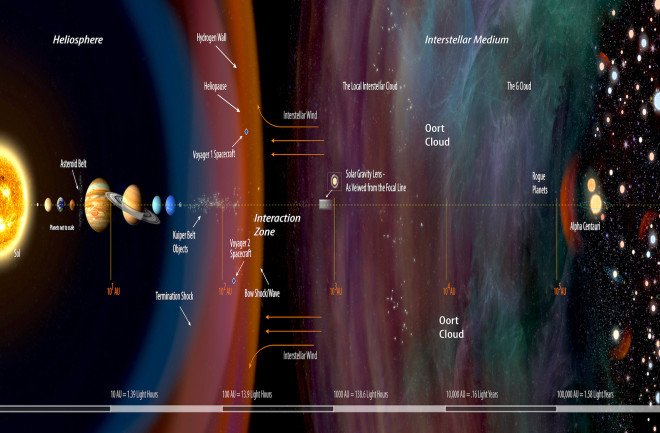 Space is so vast that every location exist at a different "now" from our point of view. Light from objects at left takes minutes to reach us; for objects at right, light takes years to arrive. (Credit: Charles Carter/Keck Institute for Space Studies)

It happens pretty much every time I tweet or post about an astronomical event that happened somewhere far off in interstellar space: I talk about an event in the present tense, as something about to happen, and someone chimes in with a correction along the lines of, "You mean it happened long ago and we just don't know about it yet!"

Just yesterday I was commenting on the possibility that Betelgeuse might soon explode as a supernova. The immediate responses: "So it may have already gone supernova?" "May already have gone." "It could have already gone supernova." My colleague Tom Levenson offered a pointed reductio ad absurdum to the conversation. I noted that the explosive blast from a Betelgeuse supernova will take up to 100,000 years to reach us. "Or will have taken," he replied, before adding "Timeslines are a pain in the ass."

Well said, Tom. There's nothing like astronomical distances and the finite speed of light to make you aware of how nebulous the idea of now really is. The peculiar truth is, every perception of the world is a perception of the past. What we call now is really the moment that light (or other information) reaches us. In everyday life, those the gap between the two is so small that we cannot notice it--but it is there. Information time lag is embedded into the physics of our existence.

The most obvious astronomical example is the stars in the night sky. Even with light streaking through the near-vacuum of space at 299,792 kilometers per second (186,282 miles per second), it takes many years to travel from star to star. When astronomers give a distance in light years, they are describing how far a beam of light travels through empty space in that much time. The light from Alpha Centauri--the nearest naked-eye star in the sky--is 4.4 years old by the time it reaches your eye. That translates to 4.4 years x 31,557,000 seconds in a year x 186,282 miles per second, or about 26 trillion miles.

You see how messy things get. Looking deeper into space, the confusion only gets worse. The most distant thing you can generally see with the naked eye on a clear, dark night is the Andromeda Galaxy. It is 2.5 million light years away. The light you see tonight started on its journey long before there were any modern humans on Earth. In other words, there were no people around to record the now that you might try to pin on the Andromeda Galaxy.

Stars live so long that, for the most part, you can safely assume that the bright, nearby ones visible to the naked eye have not changed much in the time since their current light started on its journey toward Earth--Betelgeuse possibly being a rare exception. For the Andromeda Galaxy, though, you are dealing with a much greater stretch of time. Some of the stars there have surely exploded as supernovas since then; we just haven’t seen that happen yet. So are they there now?

If you have an old-style analog TV that you can set to broadcast channels, turn it to a high-number channel with no signal. Some of the "snow" that you see on the screen is microwave emission from the Big Bang, the cosmic microwave background. What you are seeing now happened 13.8 billion years ago, but it is also an integral part of the universe now...whenever now is.

And there is nothing special about stars and galaxies, except that they are extremely far away. In reality, we see every single object around us as it was at some point in the past. That statement may sound strange, but it makes sense as soon as you think about it. When you see an object, your eyes are collecting light that the object either emitted or reflected. Closer to home, then, the time gap gets smaller but it never disappears.

Light from the Sun takes a little over 8 minutes to reach the Earth, so you see the Sun as it was 8 minutes in the past. Is it sunny outside right now? Well, the scene might be sunny, but the sunlight is 8 minutes old. Are you really sure the Sun is still there now? Light from the Moon takes 1 1/3 seconds to reach the Earth, so you are always seeing it as it was a little over one second ago.

Look at a distant mountain 30 kilometers (20 miles) away, and you are seeing it as it was 1/10,000th of a second ago. By coincidence, the speed of light is close to 1 billion feet per second, making it easy to do the math for everyday objects using American units. Gaze down at the ground from an airplane at 10,000 feet and you are looking 1/100,000th of a second into the past.

No need to stop there. Gaze across the street at a house 100 feet away and you are looking 1/10,000,000th of a second into the past. If your phone or computer screen is one foot in front of your face, you are seeing it as it was one-billionth of a second in the past. You can approach the present, but you can never quite get there. We are all literally living in the past.

The only way to disentangle yourself from this temporal madness is to adopt a personal version of relativity. The most sensible way to define the timing of an event is to embrace the idea that now is the moment when the information of the event (most commonly in the form of light or other radiation) reaches you. By that standard, the supernova explosion of Betelgeuse has definitely not happened now.

The exciting thing, though, is that it could happen soon.