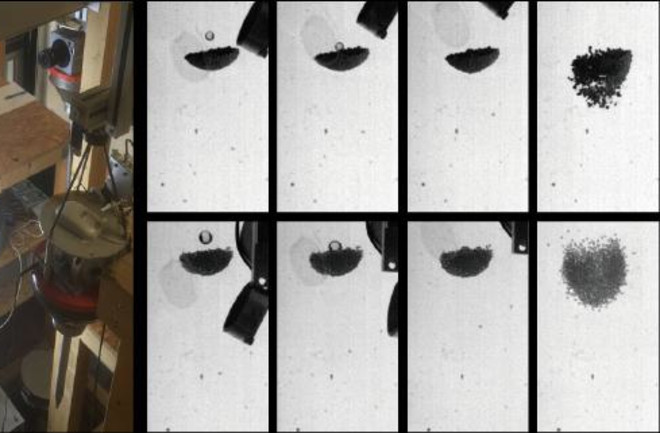 (Left) Picture of the laboratory drop tower. (Right) The expansion of granular clusters from impact. (Credit: Hiroaki Katsuragi and Jürgen Blum) By firing plastic, lead and glass projectiles into clumps of dust, researchers are improving our understanding of how planets form in the universe. Planets start out as loose clumps of dust grains. And, like flour clumps up as you mix it into cake batter, cosmic dust clumps eventually build up to become planets like Earth as gravity pulls them together. But there's still much to be understood about this process. So, to investigate some of the dynamics behind this process, researchers shot projectiles into clumps of free falling dust.

As planets form, they often collide with other matter and objects around them. So, understanding how the dust clumps that one day become planets react to impacts is key to creating a realistic planetary-formation model, the researchers say in a statement. To recreate these cosmic dust collisions, a team of researchers had to first create realistic dust balls to mimic the cosmic dust that forms planets. They eventually settled on a mixture of dispersed, irregular-sized silicon dioxide particles, Hiroaki Katsuragi, author and granular physics expert from Nagoya University, said in an email. The researchers shook these particles until they formed small clumps, and then simply gathered them into a cup. The experiment also included glass beads as a comparison.

The team then built a drop tower featuring a large glass tube in which vacuum and microgravity conditions mimicked outer space. They dropped the dust and glass from the top, and as they were falling, shot a a variety of projectiles of varying sizes at them. The experiment contained a high-speed camera that was dropped (and then caught by a sand-filled bucket) to capture the impacts in free fall. “According to our result, the mechanical strength or rigidity of particles composing target granular cluster is not very important to discuss the impact mechanics,” Katsuragi said. So, whether the loose clumps were made up of soft dust or rigid glass, it didn’t really affect the collisions. “This could simplify the planet formation model. We don’t have to consider the difference of strength or rigidity of materials during the planetesimal formation (a very early period of planet formation),” Katsuragi said. Overall, the experiment provided valuable information about the likely behavior of pre-planetary dust clumps, like how and how quickly they expand upon collision. This experiment could even potentially improve the planetary formation model and support our general understanding of how planets form, the researchers say. Also of interest was the similarity Katsuragi noticed between the clumps in his experiment and the kind of flour clumps you might see while baking. "This research provides the novel viewpoint for the relation between everyday phenomena (clump formation during cooking) and planetary phenomena (planetesimal formation)," he says. It's a way to see the cosmos in your kitchen.