Honeybees See the Difference Between Numbers—Literally 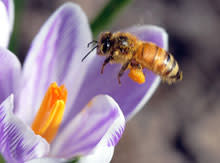 Honeybees have the ability to distinguish and remember visual quantities up to four, according to a new study. Researchers demonstrated that honeybees can match patterns containing the same number of icons, even when the icons are of mixed color and shape. This suggests that honeybees possess a basic number sense that was once thought to be exclusive to vertebrates. Researcher Shaowu Zhang says,

"There has been a lot of evidence that vertebrates, such as pigeons, dolphins or monkeys, have some numerical competence but we never expected to find such abilities in insects. So far as these very basic skills go, there is probably no boundary between insects, animals and us" [Daily Mail]

To test the extent of the bees' number sense, researchers set up a Y-shaped maze with a sweet treat at the end of one arm. In the training phase, bees entered the base of the

maze through an entrance marked with either two or three dots. They had to remember this number when the maze forked into two paths— one marked with two dots, the other with three—in order to reach a sugar-water reward [Telegraph]. The 20 or so bees that were trained attained a success rate of 70 percent. Researchers then presented tougher challenges by increasing the number of dots. The bees could also distinguish between three and four dots, but were confused when even more dots were added.

To eliminate the possibility that the bees were cheating on their math test—by using other clues to recognize the patterns—the researchers replaced the dots with different icons, including stars, lemons, and flowers, in a variety of colors. The bees proved up to the challenge even when the icons were mixed and their configurations altered. Researchers also conducted additional trials in which the sugar-water reward was absent to make sure the bees were not following olfactory cues. The study is published in PLoS ONE. While the researchers say the bee's achievement doesn't exactly qualify as counting, it does demonstrate a capacity for visual generalization that could be useful in nature, perhaps in identifying sources of pollen.

“So while many researchers still adhere to the view that smaller brains automatically mean ‘less intelligence,’ the opposite might sometimes be the case,” [bee scientist Lars] Chittka says. Honeybees might be getting by with less memory capacity because they use clever strategies like categorization [Science News].