Undertaker bees, the queens who were called kings, how honey helps wounds... 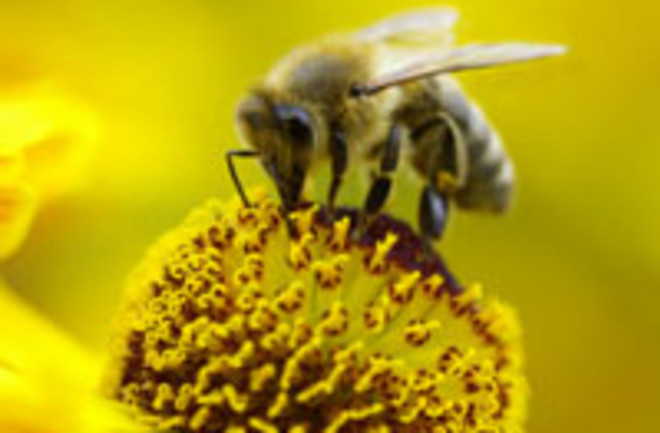 1 There are 16,000 species. Most are solitary insects; only about 5 percent are social bees, the most common being the honeybee. As many as 80,000 of them colonize a single hive.

2 Drones—the male honeybees—live only for mating with the queen. If there is a shortage of food in the hive, the workers kick their lazy, gigolo asses out.

3 To die for: When drones mate, they die afterwards from a ruptured abdomen. Sex detaches their endophallus, which gets stuck inside the queen.

5 The queen was known as the king until the late 1660s, when Dutch scientist Jan Swammerdam dissected the hive’s big bee and discovered ovaries.

6 Someone call Homeland Security! Australian researchers discovered that honeybees can distinguish human faces. The insects were shown black-and-white pictures and given treats for right answers.

8 The term “honeymoon” is derived from an old northern European custom in which newlyweds would consume a daily cup of mead, made with fermented honey, for a month.

9 The term “bee’s knees” was coined by American cartoonist Tad Dorgan, who was also responsible for “the cat’s pajamas,” “the flea’s eyebrows,” “the canary’s tusks,” and (apropos of nothing) “Yes, we have no bananas.”

10 During World War I, honey was used to treat the wounds of soldiers because it attracts and absorbs moisture, making it a valuable healing agent.

12 Bumblebees can estimate time intervals. Researchers have found that the insects extend their tongues in tandem with the rhythm of a sweet reward. This aids in the hunt for nectar, whose availability waxes and wanes.

13 Melittosphex burmensis, recently found preserved in amber in a mine in northern Myanmar, is the oldest bee known. It lived 100 million years ago.

14 After he had pioneered the laws of genetics with pea plants, Austrian monk Gregor Mendel bred a strain of hybrid bees. Unfortunately, they were so vicious he had to kill them.

15 The buzz that you hear when a bee approaches is the sound of its four wings moving at 11,400 strokes per minute. Bees fly an average of 15 miles per hour.

16 A newly hatched queen immediately kills all other hatched and unhatched queens in the hive.

17 The Honeybee Boogie: In 1943 Austrian zoologist Karl von Frisch published his study on the dances bees perform to alert fellow workers. A round dance indicates that food is close by; a waggle dance means it is distant.

18 Worker bees have strictly regimented roles, including that of undertakers who drag their dead siblings from the hive.

19 On the April 1984 Challenger flight, 3,300 bees, housed in a special but confining box, adapted perfectly to zero gravity and built a nearly normal comb. But they didn’t go to the toilet. Since bees excrete only outside the hive, they held it in for seven days. A NASA spokesperson said the space hive was “just as clean as a pin.”

20 According to an old wives’ tale, a bee entering your house means a visitor is on his way, and if you kill the bee, the visitor won’t be a pleasant one. Suffice to say, invite that unexpected honeybee guest to sit down to tea.