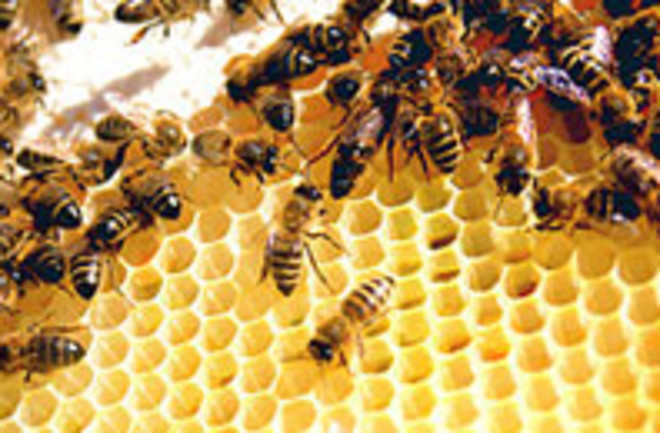 The plight of honeybees got an official hearing in Congress last Thursday as farmers, scientists, and even Haagen-Dazs executives testified about the mystery of "colony collapse disorder," which has been killing off honeybees since the fall of 2006. Beekeepers are getting desperate, but scientists still don't know why more than one-third of U.S. hives were destroyed last winter. To make things worse, one promising avenue of research has just been debunked. Researchers had recently zeroed in on a bee ailment called deformed wing virus as the culprit, and had hypothesized that the virus was being transmitted by a parasitic mite that's been observed in failing hives. However, a new study published in the Journal of General Virology [subscription required] discredits that theory, finding that the virus

does not grow within the mite. Instead, the infection has been found only inside the gut of the [parasite], suggesting that the mite has merely eaten it from the bodies of bees already infected [The Times].

Last week's congressional testimony brought renewed attention to the vital role bees play in our agricultural system, and thus in our economy;

nationwide, bees pollinate $14.6 billion worth of fruits and vegetables every year [The Columbus Dispatch]. The ice-cream company Haagen-Dazs was on hand to tell Congress

hat more than 40 percent of its product's flavors, derived from fruits and nuts, depend on honeybees.... As for whether strawberry, raspberry or almond ice cream could disappear, Haagen-Dazs brand director Katty Pien said, "We hope not, but that's why there is such a sense of urgency, so that the millions of people who love our strawberry ice cream can have it forever" [The San Francisco Chronicle].

Researchers say it's possible that no single factor is to blame for the massive die-offs, and that colony collapse may be the result of interacting factors such as pathogens, poor nutrition of bees and the stress many of the insects undergo when hauled from one field to the next to pollinate farmers' crops [Cox News Service]. Pesticides used in the fields may also play a role in weakening the bees, researchers say.